Wayne Taylor Racing’s No. 10 Konica Minolta DPi Cadillac driven by Jordan Taylor, Renger van der Zande, Kamui Kobayashi and Fernando Alonso won the 57th running of the Rolex 24 At Daytona when IMSA deemed the event official after 23 hours and 50 minutes. The race was cut short after extensive rainfall caused some of the most extreme weather conditions ever seen at Daytona International Speedway.

Battling some of the worst conditions in the history of the event, F1 veterans Alonso and Kobayashi joined Taylor and van der Zande in giving Wayne Taylor Racing its second victory in the three years of the DPi formula.

Steady rain began to fall at 6 a.m. ET and only got worse, leading to a number of caution periods and two red flags for the first time in the event’s history, first for an hour, 45 minutes on Sunday morning and a second and final time at 12:39 p.m. ET with 1 hour, 57 minutes remaining.

Moments before the final caution, Alonso took over the lead when Felipe Nasr went wide in Turn 1 in the No. 31 Whelen Engineering Cadillac DPi-V.R. The 17th caution came out four minutes later — followed six minutes later by the red flag that eventually ended the event.

Alonso earned his first Rolex Daytona Cosmograph in his second start in the event, seven months after taking the overall victory in the 24 Hours of Le Mans. He becomes the third F1 champion to win an endurance race at Daytona, joining Mario Andretti and Phil Hill, whose win in 1964 came in the 2,000-kilometer Daytona Continental road race.

The #Rolex24 is official.

Congratulations to our class winners at @DISUpdates, and congrats to @alo_oficial, a winner at Le Mans and now Daytona! pic.twitter.com/R8H087PfYi

“Just an amazing experience with the team from the test now to the race,” said Alonso, a two-time F1 champion and 32-time Grand Prix winner. “A perfect execution of the race. Very different conditions for all the competitors, so I’m really happy for the team. It’s too bad we didn’t get to race the full distance, but we led the race in night, day, dry and wet, so I think we all deserve this one. You had to survive every lap. It wasn’t a matter of lap times or anything like that. It was a matter of crossing the line, putting the lap together and at the end, it worked.”

Taylor also won the race in 2017 — with a lineup including NASCAR superstar Jeff Gordon, his brother Ricky and Max Angelelli — while van der Zande won for the first time.

“The closing hours were like a roller coaster in terms of highs and lows,” said car owner Wayne Taylor, who won as a driver in 1996, owner-driver in 2005, and owner in 2017 and 2019. “People will never be able to able to understand, and it’s impossible to explain what goes through my mind and my family, with all the efforts, the focus and vision we need to make this happen. The team is all like family.”

Finishing second in DPi for the second straight year was the No. 31 Whelen Engineering DPi-V.R driven by Nasr, Eric Curran and Pipo Derani.

“This wasn’t racing, it was survival,” said Curran, who is transitioning to an endurance-only role for the team. “Cars were spinning off on every lap.”

Mazda Team Joest entered the race with high hopes. Oliver Jarvis qualified on the pole in track record time in the No. 77 Mazda DPi, with Jonathan Bomarito a solid fourth. Both Mazdas ran in contention for many hours — battling the two Team Penske Acuras, the two Action Express Cadillacs and the eventual winner — before double disaster struck during the seventh hour. First, Olivier Pla came to a sudden stop in the No. 55 before taking the car to the garage to repair a fuel leak. Minutes later, Timo Bernhard came to a halt near the chicane when the engine compartment of the pole-winning car suddenly caught fire, forcing retirement from the event.

In a short span of five minutes, Mazda's racing program has blown up in the #Rolex24… almost literally.

Problems for the No. 77 moments after the No. 55 headed to the garage! pic.twitter.com/nialXUp9xN

The No. 55 returned to the race, three laps down, and fought back into contention. Pla was fifth overall and back on the lead when when the problem recurred during the 14th hour. This time, the damage was terminal.

The No. 5 Mustang Sampling Cadillac DPi-V.R attempted to win the race for the second consecutive year, which would have been the fourth Daytona 24 triumph for Christian Fittipaldi and Joao Barbosa. However, the team lost considerable ground in the early hours after a visit to the garage to repair the tail lights. The pair, joined by Filipe Albuquerque, scrapped their way back to finish ninth overall and seventh in class. It marked the end of a standout career for Fittipaldi. 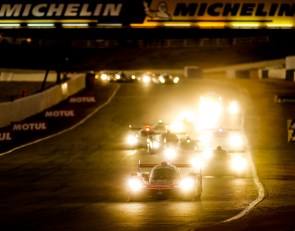 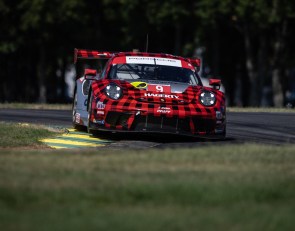