Kamaz driver Andrey Karginov has been excluded from the Dakar Rally after a Stage 5 accident in which a spectator suffered a broken femur.

The spectator and a group of four others were standing in the path of the truck in an unsecured area, away from the established spectator zone, when Karginov collided with him. Event organizer ASO released a statement saying Karginov, the rally’s winner in 2014, was disqualified for failing to stop to help the man.

The ASO statement reads: “At km 279 of the SS, a 60-year-old man from South Africa, who was watching the race in an unsecured area (outside of the established spectators zone), was hit by a race truck (#518 Andrey Karginov). The competitor was excluded from the rally by the jury of commissioners for not stopping to attend the injured spectator.

“The injured man has a broken femur. The medical teams of the rally immediately took care of him and transported him to the airport of Ilo, from where he was airlifted to Arequipa.

Kamaz teammate Eduard Nikolaev is the overall category leader by just under 12 minutes over teammate Dmitry Sotnikov. Karginov was third at the time of the accident on Friday and had won two of the five stages.

The Kamaz social media site posted a picture with the head of the KAMAZ-master team Vladimir Chagin, the team doctor Irina Zelenkova and Andrey Karginov himself visiting the man Saturday at the Arequipa hospital.

A spectator named Evens Derek Hudson has a leg injury under the rear wheel of Andrey Karginov’s truck yesterday on stage5.
Today, the head of the KAMAZ-master team Vladimir Chagin, the team doctor Irina Zelenkova and Andrey Karginov himself visited him at the Arequipa hospital. pic.twitter.com/bsLH39XX8l 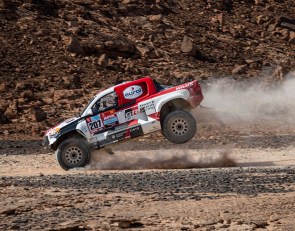 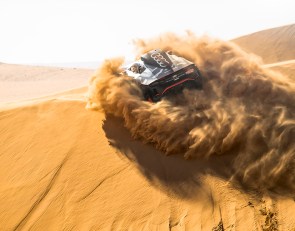