Driscoll, 40, was found guilty of two counts of wire fraud and two counts of tax evasion, all federal offenses, and one count of first-degree fraud, a District of Columbia offense. It took the jury four days to deliberate after five weeks of testimony in U.S. District Court in Washington, D.C.

According to prosecutors, Driscoll (pictured above) used money that had been donated to the Armed Forces Foundation for personal expenses such as jewelry, alcohol and personal items. Driscoll was the president and executive director of the AFF, which was a Washington-based charity assisting veterans.

A press release from the Department of Justice read: “While Driscoll was the executive director, in its promotions and request for money, the Armed Forces Foundation claimed that 95% of all donations went directly to military members and their families through the charity’s programs. … According to the evidence, Driscoll caused false reports to be filed on the Form 990s in a number of ways. For example, she failed to include the fact that she received commissions from fundraising, the amounts of commissions that she received from fundraising, and the other benefits she received. Driscoll also falsely categorized and caused others to falsely categorize expenses in the Armed Forces Foundation’s books and records as being for the benefit of the veterans, troops, and their families, when, in fact, they were for her own private benefit.”

Sentencing is scheduled for March 2019.

Brian Stolarz, the attorney for Driscoll, told Kickinthetires.net “the jury got it wrong. We will appeal.”

Driscoll and Busch met at a charity dinner in 2010. The two dated until 2014 but she then accused Busch of domestic violence in the fall of that year. According to Driscoll, when she visited Busch in his motorhome at Dover International Speedway shortly after their breakup, he slammed her head into the wall three times.

Busch was suspended indefinitely before the 2015 Daytona 500 and missed the season’s first three races. However, the Delaware attorney general declined to press charges. NASCAR then lifted the suspension, granted him a waiver to remain eligible for the Chase for the Sprint Cup, and moved his status to indefinite probation. 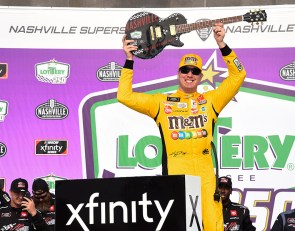