“In the time we’ve had with teams across all the classes in IMSA, a theme that we keep hearing emerge when they try our tires is that they’re very good at multitasking,” said Ken Payne, Michelin North America’s technical director for motorsports. “If you want to trail-brake in while cornering or start rolling in the throttle mid-corner to exit, apparently they’re finding our tires are pleasantly capable of doing such things.”

For Michelin’s existing teams in IMSA’s GT Le Mans category, 2019 should feel no different from recent years where the brand’s approach to tire compounds will be unchanged. Teams in Prototype, for example, will need to adjust to Michelin’s methodology, which differs from the usual grip model of soft, medium, or hard provided by other endurance racing tire manufacturers.

Michelin’s mindset targets ambient temperature ranges first — making it easier to pick a compound based on the environment faced by the tires on any given day — and once that decision has been made, teams can select the desired durability characteristics offered within that compound choice. It’s a new level of customization that extends beyond previous norms.

“It very much is in that domain of temperatures,” Payne said. “You could really characterize the one tire as a medium that is in the cooler to medium temperature range window, and then the other tire is for the higher, hotter conditions. We’ve factored in the unique characteristics of places like The Glen and CTMP in the summer months. What we’re going to have in terms of our hot tire for LMP2 is maybe a bit more of a hard hot than a medium hot that we would have, say, in GTLM.

“Our philosophy definitely is targeting tires that are intended to work in temperature ranges and pretty broad temperature ranges as well. That’s one of the changes that we may see with the slight revision for the IMSA spec tires versus the WEC tires, is that they’ll probably wind up having little bit broader functional range in terms of the temperature windows that they can work in.”

Prototype teams will have plenty of time to log miles in testing at Daytona International Speedway before the new Michelin era officially begins at the Rolex 24 At Daytona in late January. With memories of repeat and worrisome high-speed tire failures during the 2018 race, Payne says he does not anticipate similar dramas with its product.

United Autosports Ligier LMP2 was among those to have tire trouble at this year’s Rolex 24. (Image by Scott LePage/LAT)

“Carcass durability or casing endurance, tire endurance in general, is a first-order consideration for Michelin no matter what the domain or track is,” he added. “The tire we’re starting with, the LMP2 tire, is quite a robust design and in fact, we will not have a Daytona-specific tire for the prototypes. Just as within GTLM today, there is not a Daytona-specific tire. But what we do is we have a very rigorous protocol to validate our tire constructions for the different tracks and load and operating conditions that we use. It starts with simulation testing.

“It goes into machine testing with very proprietary, confidential algorithms and controls to the processes of that testing. All of that is rolled into determining what the tire design should be and then into the matrix that we provide the teams of pressure and camber recommendations. I say recommendations, but actually, requirements might be a better word to use. We’re very specific in that we’ll give a team and say, ‘OK, you’re going to Daytona. If you want to run that tire for one stint, here is the different camber settings you can use, and here is the corresponding minimum hot pressure that you have to run at in order to use that camber setting.’

“We do that for all the different tracks that we operate at. That’s one of the ways that we manage those conditions at the tracks, is by giving the teams different boundaries to operate in with respect to camber and pressure settings on the cars. We [recently] had a session down at Daytona with two of the DPI teams, and it was a very productive session, and tire durability was a nonissue.” 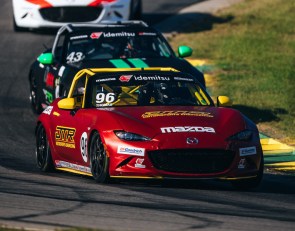