The 2018 racing season was the best of times and the worst of times for Eli Tomac. While he won another AMA450MX title as well as $1 million dollars and the curtain-closing Monster Energy Cup last month in Las Vegas, Tomac, as well as the people around him, were disappointed at losing the ’18 Monster Energy Supercross Series championship. On top of that, the performance Tomac put in as team captain of Team USA at the Monster Energy Motocross of Nations at RedBud, Michigan still keeps him up night.

RACER spoke with him just as he was about to begin testing and training in preparation for the opening round of the 2019 season on January 5 at Angel Stadium in Anaheim, California.

Q: Supercross is done, motocross is done, the Motocross of Nations is done and the Monster Cup is done. All things considered, what did you think of your 2018 race season?

ELI TOMAC: It’s kind of a replay of the year before for me. When I look back to supercross, there were a lot of wins. I felt like we were the most dominant rider, but we didn’t get the championship, so that was a letdown for us and the team in that way. We had a lot of domination in our motocross series with winning the title again. des Nations? Well, that was not a great showing from us. That is something I obviously want back. We’ll just try again next year and see if we can do better. And at Monster Cup, we know how that went’ that was pretty unbelievable. There was a lot of good taken out of the year, for sure.

The big low was Anaheim 1. You know, crashing while leading the main event. That was a setback. That was it, you know? I bumped my shoulder and missed the next race in Houston, and then had to kind of work my way back into it. That was a bump in the road. I know we were better than what we showed at des Nations as well. Those are the two lows that come to mind.

Q: What’s your takeaway on your triumphant run in the Lucas Oil Pro Motocross Championship?

ET: We were way more dominant than even the year before when we won the title. We doubled our race wins. RedBud was the only race that threw a wrench in the spokes, but maybe that was a good thing because there was no backing off. We had to keep winning no matter what. We had some serious pressure on us.

Q: Anything come at you totally out of nowhere in 2018?

ET: I’ll jump back to supercross again. Anaheim 1, that was totally just… Man, it still beats me up to this day. I was leading the race and was totally comfortable and was actually telling myself to relax, like telling myself to relax before I crashed. I wasn’t even pushing the edge, and that’s when I made the mistake. That’s what really bummed me out. That was one of the moments that really stuck with me throughout this year. At round one, when you hurt yourself, man, it’s tough. Everyone puts in that work in the off-season, but if you just throw it away in that first round, it kind of beats you up.

Q: Factoring in all the fallout from the Motocross of Nations, there is a lot of talk right now about who is the best overall motocross racer in the world. Jeffrey Herlings is brought up quite often. However if everyone is being honest with themselves, to be the best rider has to be great at both motocross and supercross, correct?

ET: I’m right there with you. In this day and age, they’re kind of turning into two different disciplines. To call yourself the best rider in the world? Yeah, you’ve got to be good at both. If we spent the entire year dedicated to motocross here in the U.S., I know that we would be at another level above where we are at now. It’s tough to make that claim, especially when Jeffrey didn’t even win all the motos at the des Nations.

ET: Oh yeah. I want to go back and redeem our showing because that wasn’t right. Yeah, I don’t think it’s going to happen that way again. We’ll see.

Q: The race is set to run – in deep sand – at the Assen TT circuit in Holland next year. Could you see the American team training in sand beforehand?

ET: It would be wise to. Bike setup is huge, and even with the wet and sandy conditions at RedBud, I think that even suited the Europeans more. They excel on that, right? If there were jumps and it was more like the normal RedBud that we race on, we would have exceled more. But yeah, going back to Assen, it would be very wise to get on those conditions right now, because bike setup can be the difference between being fifth or first or whatever it is. 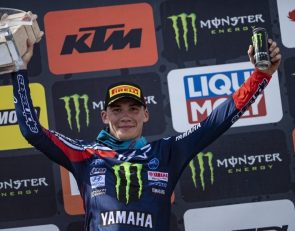