Your questions for Robin should continue to be sent to millersmailbag@racer.com We cannot guarantee we’ll publish all your questions and answers, but Robin will reply to you. And if you have a question about the technology side of racing, Robin will pass these on to Marshall Pruett and he will also answer here.

Q: I, and many other people, have said that racing seems to be sanitized, and that it doesn’t feel like these guys are the heroes and gladiators they once were. It always used to be people saying, “wow they are crazy and I’d never do that”, to now people saying “it just looks too easy and that the feeling of danger is gone”.

This seems to be true in some series, but IndyCar must have been the last true race series, other then sprint cars, where the guys are still seemed superhuman. I know we aren’t anywhere near the danger of back in the day when every year you would lose one or two guys, but as we can see after Pocono, these guys really do earn their money and the respect they should have. I really hope that Robert is going to be OK. It’s sad, knowing he was one of the brightest new drivers out there, and I hope he will be able to come back from this and show the talent that he has.

My second point is one that I need to get off my chest from seeing people on this website saying that Seb [Bourdais] is some sort of a coward for questioning whether he should get back in the car or not at Pocono! This is crazy! How can anyone point to a guy that has such a career, and the crashes he’s had, and the stuff he has seen, ever question that man’s fortitude? I am ashamed there is anyone who calls themselves a real race fan who would say that. He was questioning the repair of the track. Guess what: he got right back in the car and ran the rest of the race like nothing happened. This is the same guy who crashed at Indy and was hurt really bad, and was back in the car that same year!

RM: Mario and I were talking about why the old guard (himself, A.J., Parnelli, J.R., Gordy and the Unsers) are still so revered, and one of the main reasons is what you hit on – the modern day gladiators. And because of aerodynamics, tires, etc. drivers have been able to run wide-open around ovals for many years, so people assume it’s not that big a deal. But when you see the telemetry at Indy of 233mph going into Turn 1, don’t tell me it doesn’t require bravery and talent. Today’s cars are going so fast (Townsend said it best: like flying an airplane on a superspeedway) and yes, everything is safer, but one tire rub and the reality of the consequences come at you in a hurry. And for anyone to question Bourdais’ courage is ludicrous. Do they not remember 2017? Sometimes people are really ignorant.

Q: I can’t begin to imagine the feelings coming through the Mailbag this week. Pocono was a good race, and Rossi’s team had that car hooked up. I can’t tell you the relief we had in our house when we got the word that Wickens was awake and alert. I’m sure there was a cumulative sigh of relief across the IndyCar teams and fan base when that statement was broadcast on TV. I know he has serious injuries and will out the rest of the season. It’s a shame for a driver that was showing so much talent. I have been wondering how the SPM crew and Sam Schmidt are holding up? That had to have been tough for Sam to watch, knowing his history.

I have also seen increased discussions among the fan base about windscreens or fully-enclosed cockpits. It was pretty scary to see the replay from RHR’s car showing Wickens’ car going over and taking out the camera on RHR’s roll hoop. A bit lower, and we’d be talking about RHR’s career in the past tense. Can you give us an update on this windscreen/full cockpit issue? Knowing Hinch’s hands were injured by debris entering the cockpit will also heat up this discussion.

Finally, thank the NBC crew and directors for the class they showed during the red flag. They did not show the close-ups of Wickens , nor zoom in on the safety crew working on him.  Once it was announced that Wickens was awake and alert, they proceeded to show the close-ups and certain camera angles. It was also good they held off going to commercial and stayed on coverage talking to drivers, owners, etc.

Last, three cheers for the Safety Crew. They have again shown they are the best in the business and a true asset to IndyCar and the drivers. We all raise our glasses to you guys!

RM: I flew home with the SPM crew Sunday night and they’re all pros, just like the drivers. They understand what can happen at 200mph with open-wheel cars, and naturally, they were all concerned about Wickens, but they also know they have a job to do. And that’s how a race driver has to approach it as well. It’s part of what you sign on for, but thankfully doesn’t happen that often anymore. The windscreens will be tested more after the season, that’s all I know.

Q: No doubt we all breathed a sigh of relief when we heard Robert Wickens was alert and awake, and we now know his injuries are not life-threatening. I was sick to my stomach when I saw that crash in real time, and had the angle he hit the fence been different, the outcome could have been much worse. PT mentioned that we’ve yet to address the catch fencing, and I’m wondering if there is more that can be done? Or, is a place like Pocono just too dangerous for the cars and the speeds they travel? Is this just the risk they drivers must take to put on a show? I’m conflicted, but I will also confess it is quite a thrill to see the cars racing each other at fast speeds. How do we move forward?

RM: Indy, Texas, Pocono …. high-speed tracks with open-wheel cars and, yes, risk is part of the job description and attraction. I suppose IndyCar could drop oval-track racing except for Indy, but that would be the end of the most diverse series in the world and IndyCar’s heritage. You move forward like always. IndyCar has made racing safer by the decade, but there are no guarantees – it’s a dangerous profession. 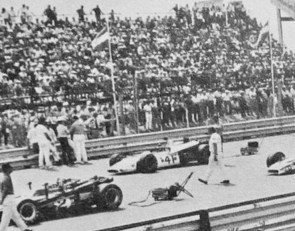