The Burtons join a growing list of NASCAR stars that have announced they will compete. Among those already entered are NASCAR Cup champions Bill Elliott and Bobby Labonte as well as Mike Skinner and Wally Dallenbach Jr.

“Anyone who knows the Burtons will tell you they are a class act,” said SVRA CEO Tony Parella. “Having Jeb join his dad at VIR is similar to Matt Brabham joining his father Geoff at the Indy Legends Charity Pro-Am. Matt was the big winner there, so look out for Jeb.”

The VIR event will benefit IGNITE – the Autism Society of North Carolina’s community center for young adults with high-functioning autism or Asperger’s syndrome. IGNITE was founded by The Evernham Family Racing for a Reason Foundation – a nonprofit established by legendary NASCAR crew chief Ray Evernham and his family. Evernham will share a car with Elliott as the amateur of the team in the VIR race. The two have raced in the Indy Legends Charity Pro-Am Presented By RACER Magazine the past three years.

Ward Burton won the 2002 Daytona 500 as well as the 2001 Southern 500 at Darlington. In all, he has five NASCAR Cup wins, seven poles and 82 top-10 finishes to his credit. Burton also has impressive Xfinity Series credentials with four wins, 50 top-10s, and seven poles back in the Busch entitlement sponsorship era. His career breakthrough came in 1990 when he earned a ride in the Busch Series. He scored his first big race win in that series at the 1992 Rockingham race. By 1994 Burton was signed by A.G. Dillard Motorsports to campaign their Chevy in the NASCAR Cup Series. His first victory in Cup competition came at the spring race at Rockingham in 1995. Since winding down his driving career, Burton, who was appointed by the Governor of Virginia to the Virginia Board of Game and Inland Fisheries in 2005, has been an active outdoors sportsman and conservationist. He also founded the Ward Burton Wildlife Foundation.

Jeb Burton got his start at 16 in the Whelen All-American Series where his father Ward, and his uncle Jeff launched their careers – at South Boston Speedway and Ace Speedway. The versatile 26-year-old has competed in ARCA, Xfinity, NASCAR Trucks, and virtually a full NASCAR Cup season in 2015. He scored an impressive win in the 2013 NASCAR Truck race at Texas International Speedway. Burton also nailed down seven poles and 19 top-ten finishes across three seasons of Trucks Series racing. No stranger to VIR, Jeb competed in an SCCA Pro Racing-sanctioned Volkswagen Jetta TDI Cup Series event in 2009. This will be the first race since Jeb’s karting days that both father and son have competed on track together. 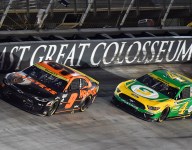