Spencer Gallagher will compete at Watkins Glen International after all.

GMS Racing announced over the weekend that AJ Allmendinger will drive their No. 23 Chevy in the Xfinity Series race. Gallagher has not yet returned to the seat full-time because the company is honoring contracts made during his suspension that was handed down in May and lifted July 4.

However, Gallagher will make his Monster Energy NASCAR Cup Series debut at the road course Sunday afternoon. The 28-year-old is listed on the entry list in the No. 23 Toyota for BK Racing with sponsorship from Allegiant.

Gallagher has two Xfinity Series starts at Watkins Glen, finishing 22nd in 2016 and 32nd last season. In 517 Cup Series starts, BK Racing’s best finish is a sixth-place effort at Bristol by Matt DiBenedetto in the spring of 2016.

Ironically, BK Racing is about to be sold to a new owner in order to pay off creditors, and one of the bidders is GMS Racing president Mike Beam.

According to court documents, Beam has in a bid of $1.8 million, which would be the minimum bid for the sale of the team. Others who intend to enter the picture must have a bid submitted to the trustee running the team by August 13.

Any sale would likely finish before Labor Day, and NASCAR must approve all buyers. 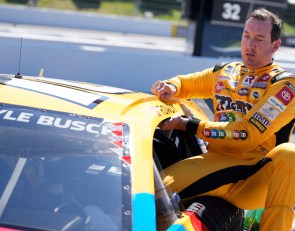