Both Brittany and Courtney Force are the current No. 1 qualifiers in their respective nitro categories after one qualifying session due to inclement weather at the Summit Racing Equipment NHRA Nationals at Summit Motorsports Park.

Matt Smith (Pro Stock Motorcycle) is also a current No. 1 qualifier at the 12th event of 24 on the 2018 NHRA Mello Yello Drag Racing Series schedule. Weather did not allow for Pro Stock to take to the track during Friday’s qualifying.

Brittany Force piloted her Monster Energy / Advance Auto Parts dragster to a 3.776-second pass at 324.44 mph which took her to the top of the Top Fuel category Friday evening. She looks to secure her second No. 1 qualifier of the season and 10th of her career.

“That pass was very important for our team,” Force stated. “With the rain you don’t know how many laps you’re going to get in before race day. The conditions were great, and we just went straight down there.”

Funny Car points leader Courtney Force leads qualifying with her run of 3.935 at 327.66 in her Advance Auto Parts Chevrolet Camaro SS. She is coming off a No. 1 qualifying position in Bristol and seeking her eighth No. 1 of the season.

“Going up there I was a little surprised we were going to lay down a number like that,” Courtney Force said. “With the rain coming in I was just looking for a clean run from point A to B. The car went straight down there and it felt like a good run.”

Smith holds the Pro Stock Motorcycle top spot after running as 6.866 at 195.39 on his Victory Magnum. He looks to lock-in his first No. 1 qualifier of the season.

“It was good to get the first run down,” Smith stated. “We have a top three bike every weekend. I’ve just got to do my job, be focused and hurt some feelings.” 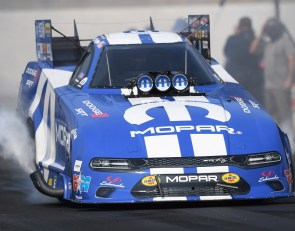