Allmendinger, Bowman and Suarez win their way into All-Star Race via Open stages

Allmendinger, Bowman and Suarez win their way into All-Star Race via Open stages

Aric Almirola started from the pole in the first stage and had things in hand for 13 laps. Then along came Alex Bowman.

Bowman won the first stage after starting third. The No. 88 battled teammate Chase Elliott, even lost second to Paul Menard briefly, but charged back and took the lead from Almirola on Lap 14. Bowman then held off Erik Jones to the end of the segment.

Saturday will be Bowman’s first appearance in the All-Star Race.

Daniel Suarez won the second stage. Restarting third, Suarez charged on the outside to take the lead on the first lap of stage two. He would lose the lead on Lap 14 to Elliott but charged back a lap later and would never again surrender the top spot no matter who tried to grab it.

Suarez will make his second straight appearance in the All-Star Race.

“I thought it was going to be pretty tough to pass [Elliott] back, but I found out in one lap how big of a run the 47 [AJ Allmendinger] was giving him, and eventually he gave me those runs to try to pass him as well,” said Suarez. “Really proud of these guys. Happy to be in the big show one more year.”

The final stage was the most dramatic. Eight cars, all within a second of each other, took the white flag to battle for the win. Allmendinger had been close in the previous segments showing his speed and was finally able to pounce on the lead with two laps to go.

Diving underneath Elliott, Allmendinger took the lead going into Turn 3 and then held off the antsy pack to advance into the main race.

“I don’t care how many cars are in the field, or if it was the third stage, second stage to win and get into the All-Star Race,” Allmendinger said of the battles. “My guys have worked so hard. [Competition director] Ernie Cope told me bring back the steering wheel or we’re going to win this thing, so I made a conscious decision there I was crashing or I was going to win the thing.”

Chase Elliott took the final spot in the All-Star Race by winning the fan vote for the third consecutive year.

Among those missing from the All-Star Race are Erik Jones, Paul Menard, Aric Almirola, William Byron and Darrell Wallace Jr. 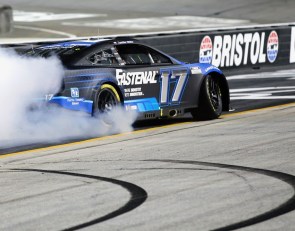 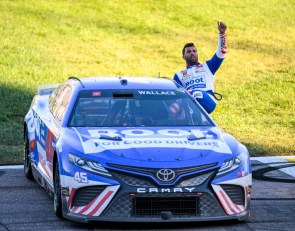