Scott Dixon returned to form and to the front during Friday morning’s opening practice period for the 44th Toyota Grand Prix of Long Beach.

Dixon, who qualified 18th at Phoenix and rallied to finish fourth, turned a lap of 1m08.412s in the PNC Honda to edge Ryan Hunter-Reay’s DHL Honda during the 45-minute session held in the typically sunny skies of Southern California.

Hunter-Reay clocked 1m08.428s and was a fraction faster than Andretti teammate Alexander Rossi’s best effort of 1m08.607s in the NAPA Honda.

Simon Pagenaud was the quickest Chevrolet for Team Penske at 1m08.739s and James Hinchcliffe, the 2017 winner here, checked in fifth at 1m08.913s in the ARROW Honda.
Takuma Sato, the 2014 TGPLB victor, was sixth fastest at 1m08.929s, just a tick ahead of two-time Long Beach winner Will Power’s best of 1m08.948s in the Verizon Chevy.

There were several spins but nobody made any serious contact.

UP NEXT: The second practice session is set for Friday afternoon at 5 p.m. ET. 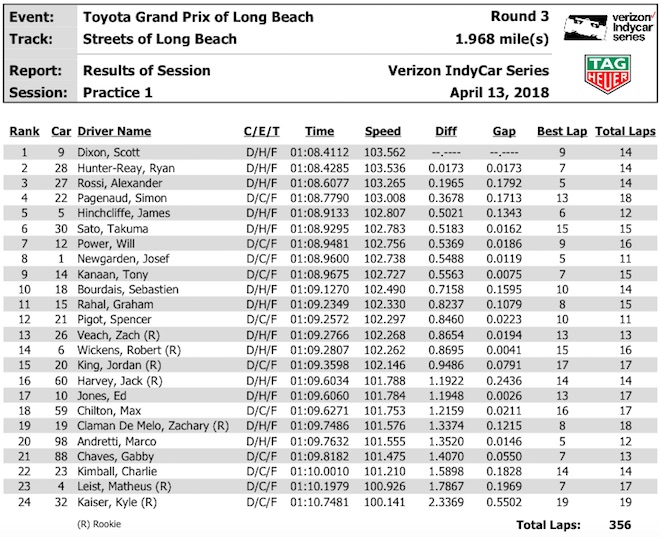