INSIGHT: How an IndyCar practice session compares to Formula E

INSIGHT: How an IndyCar practice session compares to Formula E

This weekend, the Verizon IndyCar Series will take to the streets of Long Beach for the 37th time. Six thousand, three hundred miles to the east, the ABB FIA Formula E Championship takes to the streets of Rome for the first time. The question we put to Andretti Autosport co-team principal and chief technical officer Roger Griffiths is if the two are equally far apart in terms of how a team manages a practice session to find the optimum settings for qualifying and the race.

Griffiths has a keener insight into the two series than most. Before moving to MS&AD Andretti Formula E, he was a senior engineer with Honda Performance Development (HPD) on the IndyCar engine program, and in his current role, he still keeps his finger on the pulse of Andretti’s IndyCar activities, even if the day-to-day operation lies in the hands of others.

“Regardless of which program you’re talking about, it’s still racing,” says Griffiths (pictured below), who is working closely with BMW on powertrain development this season in advance of Andretti Autosport becoming a full BMW Motorsports works team in Season 5. “The objectives are the same – to be the fastest over a prescribed distance with the energy you have available.” 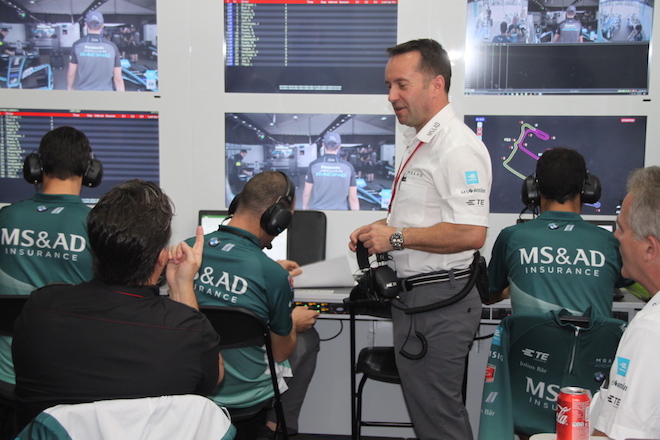 What is entirely different is the approach in getting to that goal.

“Time is one of the biggest differentiating factors,” Griffiths says. “An IndyCar road course weekend typically has practice and qualifying over the course of two days, so if it all goes wrong on the first day you have overnight to analyze what happened and how you might fix it. Of course, there’s the danger you might overthink it.

“In Formula E we get two 45-minute practice sessions with an hour in between, and then another 45 minutes to prepare for qualifying. Three or so hours later we are racing. That compression of time in just one day puts enormous pressure on everyone to perform, because there’s no opportunity to regroup.”

Typically, Formula E teams have the day before the first on-track session to get all of their car prep and baseline set-up sorted. Using data from race simulations, from the prior season if available, all of the chassis settings are made – and adjusted, if necessary – in the intervening time between free practices one and two. According to Griffiths, the teams have their drivers in a simulator all the way up to the evening before race day, trying to take into account variables like weather and track surface condition.

Spend time in the Formula E pit box, and one senses a lack of anything “mechanical” going on – certainly in comparison to IndyCar, where set-up work is accompanied by the melody of ratchets and wrenches. Does that mean that there is less direct involvement with a Formula E car set-up than on an IndyCar?

“It’s definitely not a “change the spring rate by 100 pounds” or “add a shim to adjust the wheel camber” type of environment,” explains Griffiths. “We can make changes through software mapping, not just to the powertrain, but even to the brake systems, which has a knock-on effect in terms of power recovery and a host of other things that have a bearing on car balance and performance.”

This helps to explain the ratio of staffing on the team, which is evenly split between engineers in the team’s control center, and hands-on mechanics. 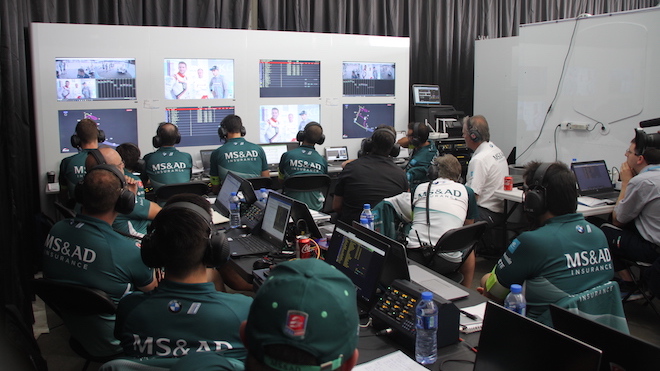 “In IndyCar during a practice session, many teams have two or three spring and damper packages that they are testing,” says Griffiths. “In Formula E, if we are testing spring packages, we can install a different one in each car and the driver can do back-to-back comparisons. However, our focus in practice is mostly on drivetrain changes made via software. These changes are significant in terms of car performance, even if they are more subtle because they are made with a laptop instead of a set of wrenches.” 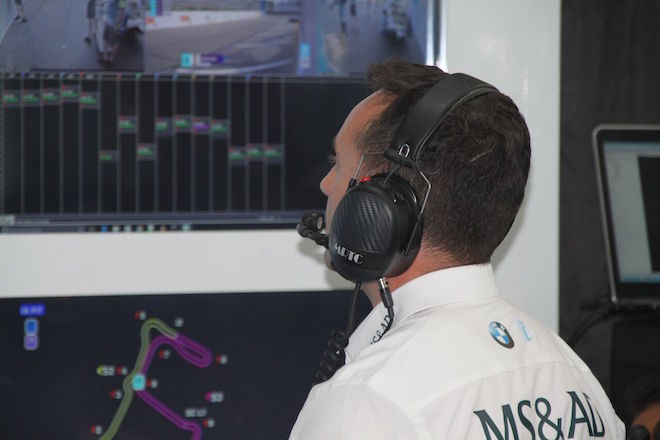 Energy management is another factor that both IndyCar and Formula E must manage precisely throughout a race weekend. For IndyCars, fuel consumption targets mostly come into play in terms of determining pit stop strategy during the race, but also play a factor in car balance as the fuel load decreases corresponding to a weight change. Managing fuel levels is a well understood process, and the ability to fuel the car as needed makes it somewhat less complex than in Formula E. 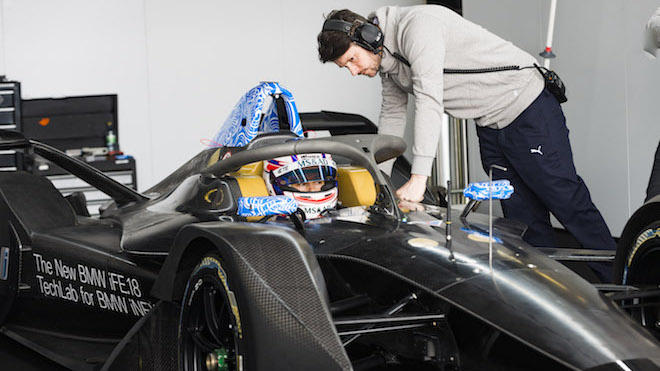 As anyone with a mobile phone has experienced, battery performance can be fickle, and managing it for peak performance is sometimes a moving target. It takes 55 minutes to fully charge a Formula E battery pack if it’s cold (more if hot), so while the team’s cars do get plugged in for a top-up, the reality is that they must manage battery usage over the whole of the day. In contrast to the mechanical activity that surrounds an IndyCar, a Formula E garage sees a barrage of air blowers channeling cold air provided by dry ice to the cooling system around the batteries, even when ambient air temperatures are mild.

“The battery is our biggest source of heat with a narrow operating window,” states Griffiths. “On the cool side we have to be above 23 degrees celsius (73.F) and on the hot side below 63 degrees Celsius (145.F). So whether we are charging the car, or when it is on-track and regenerating energy, it is creating heat. If the battery gets over 60 degrees we lose a tremendous amount of power, and regeneration becomes negatively affected starting around 55 degrees. Also the battery won’t charge if it’s too hot. Heat management on a Formula E car is critical to performance.”

He goes on to describe how track performance is balanced against battery management.

“There are two power levels in Formula E, one for qualifying and one for the race.,” he says. “Across the whole of the day we have to keep energy targets in mind while still trying to go as fast as we can, and understand what works and what doesn’t within each of the two power levels. That demands two different driving styles. For qualifying practice and qualifying itself, the driver is going flat-out at maximum power, but we only have two laps in that mode.

“There’s less power in race trim, so we manage energy to a target level that still enables us to do the lap time we need. There’s a combination of drivetrain settings, along with the driver managing the difference between time spent braking and coasting, that helps regenerate some energy against time where the throttle is 100 percent and consuming large amounts of energy. 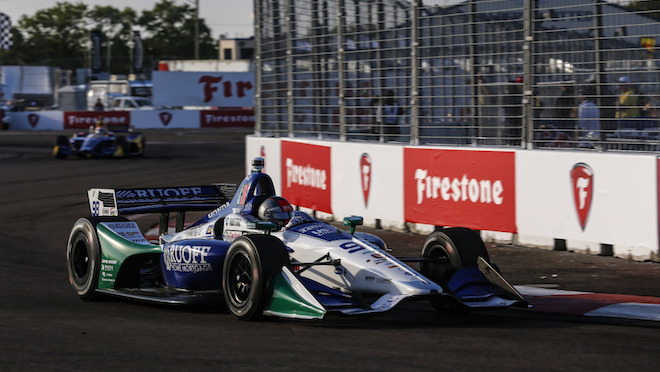 “IndyCar practice sessions are for the most part run flat-out, with the difference mostly being in the level of downforce being run, starting with higher levels and trimming it out until you find the sweet spot of straight line speed and cornering speed that a driver can achieve consistently.”

The final piece of the practice puzzle centers around tires. The spec Michelin treaded tire is not, contrary to popular belief, a street tire. It is a purpose-built race tire. Each car begins the race meeting with a new set per car and a half set as a spare. Moreover, it is the same tire spec at every race, which means that teams must learn to work with it regardless of track surface or likely ambient temperature. Moreover, the Michelin and FIA regulate minimum and maximum inflation pressure. Firestone, by contrast not only provides two compounds per race, but they also have tires specific to a track type. In terms of allocation, IndyCar teams get 11 sets for most road-circuit weekends. 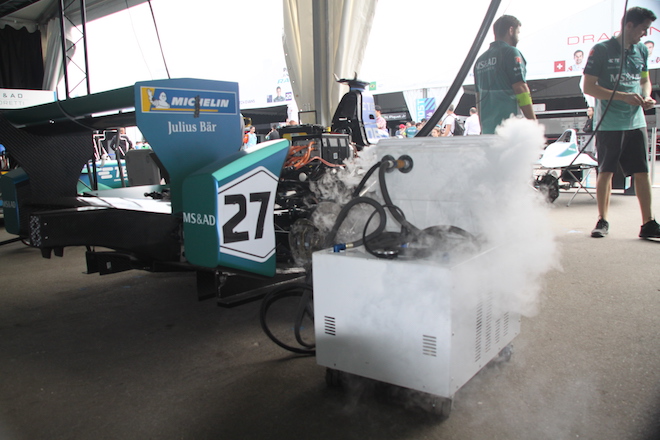 “The tires are a blessing and a curse in Formula E,” says Griffiths. “Sometimes the tire suits the track, and some times it doesn’t and we just have to deal with it. In IndyCar the red tires can behave very differently to the blacks, and so that can cause some challenges in terms of which you set-up for and where the compromise is. We don’t have that issue. On the other hand, the Formula E tire definitely has a sweet spot and it’s not when it’s new. So we can’t bolt on set of new, soft tires and go for qualifying run.”

Like all forms of motorsport, each series has its own unique set of challenges, which is part of the diversity that makes racing so interesting. Whether in Rome, Long Beach or points in between, Formula E and IndyCar teams are taking the means at their disposal to go faster and win.