To appreciate Firestone scoring its 500th IndyCar victory last Saturday night since its return to the open-wheel wars in 1995, you have to revisit how it all came together. And that requires a little trip down memory lane with Scott Pruett.

“The way Bridgestone/Firestone came back into Indy car racing was spot-on,” said Pruett, whose IndyCar career had stalled out before being hired by Pat Patrick in 1993 to become the test pilot for Firestone’s re-entry. “We tested thousands and thousands of miles the year before coming back to racing, and we showed up at the tracks after every race, and ran and ran and ran as hard as I could drive.

“It got pretty monotonous running all those laps by yourself in front of empty grandstands, but obviously it paid off.” 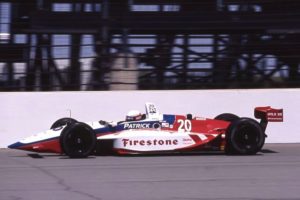 Patrick, out of racing after the Alfa-Romeo disaster of the early ’90s, had accepted Firestone’s offer to become the factory team (pictured above) with team manager Jim McGee and engineer Steve Newey on board. There was no social media in those days, just a few rumors that had Firestone either hopelessly behind or secretly satisfied.

“Well, in our first couple tests in the fall of ’93 we were not even close,” admitted Pruett, who had overcome devastating injuries to his lower extremities and back in a 1990 testing accident. “But it’s probably the best thing that could have happened, because it was a wake-up call.

“Then by mid-1994 we were feeling pretty optimistic we had something good, but we still heard the rumors we were out to lunch and we kept saying: ‘Who are they talking to?'”

Firestone opened ’95 with two full-time teams – Patrick Racing and Steve Horne’s Tasman Motorsports. Goodyear opened the season with 12 consecutive victories, even though Scott Goodyear (Tasman, pictured below) and Pruett were fighting for the win at Indianapolis that May in the closing laps. Pruett crashed while running in second place 15 laps to go, while Goodyear passed the pace car and threw away a sure triumph. 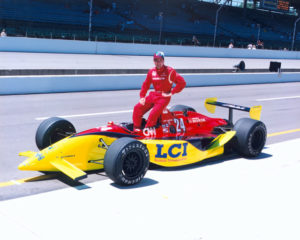 “I have to say that the home office in Japan stepped up to help with the superspeedway tires, and that was big,” Pruett recalls.

But that July at Michigan, Pruett delivered the best possible reward for all the hard work. He passed Al Unser Jr. on the outside of Turn 4 on the last lap to put Firestone back in Victory Lane.

“It was checkers or wreckers,” he said with a chuckle.

From that day forward, the tire war was on as other CART teams were taking notice of Firestone’s progress, and then the Indy Racing League opened in ’96. From that point on, Firestone began dominating, scoring 77 wins to Goodyear’s 29 before the latter pulled the plug on IndyCar after 1999.

The first time Gil de Ferran and Mark Dismore (the last guys to win races on Goodyears in CART and IRL) tried Firestones, they had the same reaction as perennial winners as Goodyear regulars Michael Andretti and Paul Tracy.

“It was night and day,” said Andretti. “Unbelievable.”

But as impressive as Firestone’s performance has been these past 23 years, its durability and safety have been equally outstanding. No blown right fronts despite the heaving loading in the corners on superspeedways and compounds built to increase speed or competition – depending on what’s deemed necessary. 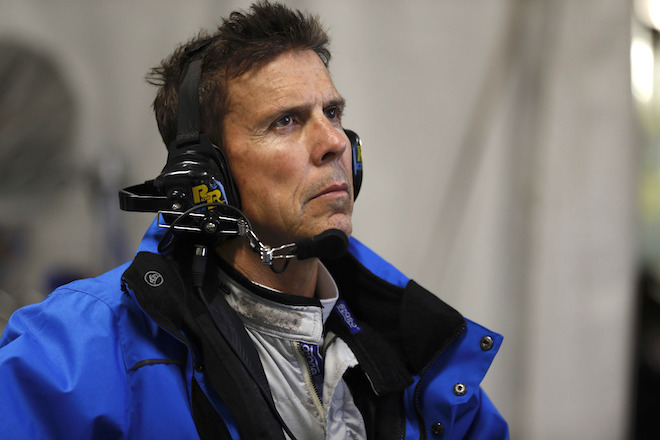 “Safety and durability were a key element from the beginning, and Firestone did some amazing testing indoors before ever getting on track,” said Pruett (above), who now spends his days working for Lexus, Rolex and minding the Pruett Vineyards outside Sacramento, and also will serve as the Grand Marshal for this weekend’s Toyota Grand Prix of Long Beach.

“It was a great time back in the ’90s. Car wars, engine wars and a tire war – but I doubt if we ever will see that again. Firestone simply took over IndyCar racing, and I’ll always be grateful they took me along for the ride.”