With 106 victories since the program’s inception 20 years ago, there aren’t a lot of races on the IMSA WeatherTech SportsCar Championship schedule where Corvette Racing hasn’t enjoyed considerable success. But with six victories in 11 races, including a GT Le Mans win in last year’s BUBBA burger Sports Car Grand Prix at Long Beach, the legendary Southern California street circuit has seen a lot of Velocity Yellow in victory lane over the years.

The two-car team will look to run its Long Beach winning percentage to .750 this Saturday when the WeatherTech Championship returns for its annual 100-minute street fight. The race will be televised live on FOX at 4 p.m. ET with live IMSA Radio coverage also available on IMSA.com, RadioLeMans.com and SiriusXM Radio.

Last year’s race saw Tommy Milner (pictured below) and Oliver Gavin take a somewhat improbable victory in the No. 4 Corvette C7.R on the final lap when No. 3 Corvette teammate Antonio Garcia encountered a blocked racetrack due to an incident in the track’s famed hairpin (Turn 11). When a lane opened up, Milner was able to sneak past for the victory. 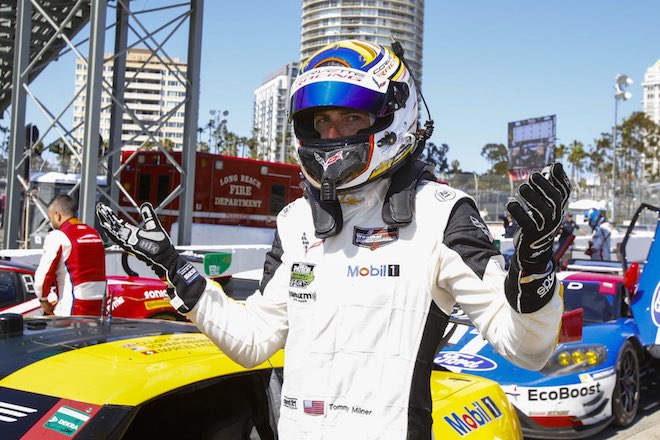 “Street races often add an extra element of surprise,” said Milner, who also lost a potential victory in the hairpin one year earlier in an incident with Frederic Makowiecki in the No. 912 Porsche. “Certainly, it has been that way the last couple of years for our team. One year it went against us and last year it went for us. That’s the nature of street racing.”

The victory last year was Gavin’s fourth at Long Beach, making him the winningest active IMSA driver on the street circuit. But it’s still tough for him.

“Long Beach is always a challenge, because we run often at the start of the day Friday (and) the end of the day Friday,” Gavin said. “You see a big evolution in track performance from that very first practice session to how the car drives in the race. We have a pretty good way of figuring that out – going through things from the past.”

Despite the unfortunate end of the race last year for the No. 3 team, it also has been successful at Long Beach in the past. Garcia’s No. 3 co-driver, Jan Magnussen, leads all active IMSA drivers with three pole positions on the circuit, and owns two career victories.

Magnussen and Garcia also won there in 2014 and go into this year’s race sitting sixth in the early GTLM point standings with a best result of third in the season-opening Rolex 24 At Daytona.

“At Long Beach, you need a little more luck than usual,” Magnussen said. “You really have to nail the pit stop, because it’s such a short sequence and race. It’s difficult to get the driver change and everything done before the car is ready to get released and back on the track. If you hit that, you can put yourself in a good position.

“We’ve historically been really good there with great results. Last year, we were looking at another good one, but it was taken away in the cruelest manner, but I’m looking forward to another good race there, so we can hopefully get back in the fight of the championship.”

Ironically, last year’s BUBBA burger Sports Car Grand Prix at Long Beach was a rare blemish on what turned out to be a championship season for the No. 3 team. By the time traffic had cleared and Garcia got going again, four GTLM cars had gotten past him leaving him and Magnussen with a season-worst result of fifth. 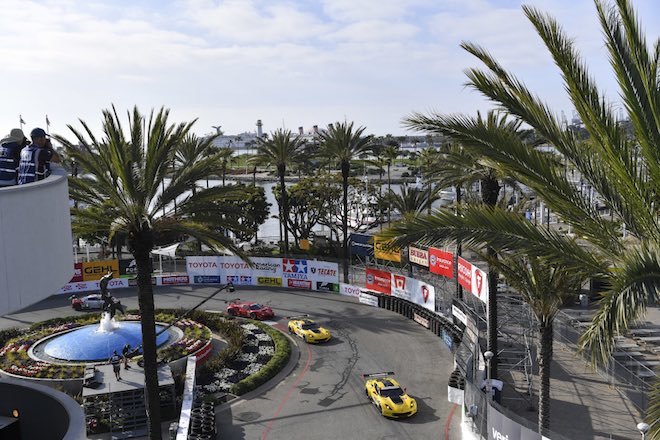 “What happened at the last corner was, of course, unfortunate,” Garcia recalls. “We’ll learn from that. In the heat of the moment and you hear the last corner is blocked, you don’t stop racing. Perhaps I should have been more calm and patient. It was a weird way of losing the race, but fortunately it didn’t really impact our championship. For Corvette Racing, Long Beach has always been really good with a number of victories.”

The victory for the No. 4 team turned out to be its only win of the season last year, so at least the disappointment for the No. 3 team was softened by the win for Gavin and Milner. The No. 4 teammates go into Long Beach seventh in the GTLM point standings with a season-best result of fourth in the Rolex 24.

“Above all, our Corvettes have been competitive historically at Long Beach,” said Milner. “This year, it seems like we have our work cut out for us based on the first two events. But a street race like Long Beach is a wild card, especially coming off our two longest events in the IMSA season at Daytona and Sebring.

“I would say everyone’s tension is a little bit higher because you sort of get set in your ways for the endurance events as far as not taking too many chances in traffic and getting to the end. But at Long Beach, you’re going as hard as you can and take every opportunity you can for however long you are in the car. That’s why Long Beach can be such a wild card in our schedule.”