Sebastian Vettel admits he tried to fool Mercedes with a radio message during the Bahrain Grand Prix as he was struggling to make his tires last as Valtteri Bottas was closing in.

Bottas had switched to medium tires during his first pit stop, making it clear he would try and get to the end of the race. In contrast, Vettel had opted for soft tires and was planning on pitting for a second time but ended up having to stay out on track and just held off Bottas in the final laps to take his second victory of the season.

“I think with 10 laps to go I came on the radio and said, ‘Everything is under control,'” Vettel said. “That was a lie because I was hoping they would tell Valtteri that, ‘Sebastian is taking it easy, save the engine, turn it down and give up.’ But they didn’t do that!

“Equally, I was sure if I said the truth and said that I was struggling massively with the tires then they would tell him and they would make sure he’s having all the power available until the end. Obviously my plan didn’t work but I tried!

“It was really tough. The tires took another step down with 10 or 12 laps to go and they weren’t getting any better. It was really difficult to keep the car on the line, especially in Turn 8 and Turn 10; just getting out of the low-speed corners was really tricky.

“When I saw him in DRS range I was thinking it would be difficult to make it last but I tried to save and deploy the energy so that I have the boost all the way down the straight, and it worked. So I’m really happy that we just managed to stay in front. It was our only chance to win the race. We could have come in, changed tires and finished third but that way was a lot better.”

Vettel added that he was expecting Bottas to catch him in the late going, having been made aware of how quickly the Mercedes was closing in during the final stint. 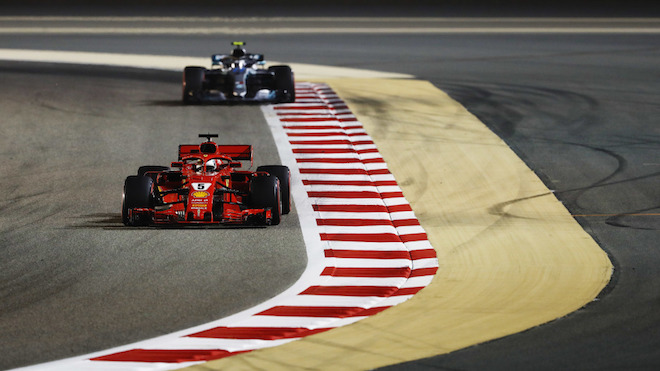 “When they told me the pace of Valtteri at that time, there was no way I could do that. I was making the maths inside the car with 10 laps to go: ‘At that pace, he’s going to catch me!’

“I tried to keep it as clean as possible. Both Mercedes at the end of their stints were very strong, already in the first one. I think by going onto the prime… obviously they saw what we did, but going onto to the medium tire, I thought that’s checkmate, because we had to come in again.

“That was the original plan, but then we diverted, obviously; the tires, I tried to make them last, nursed them as much as I could, and it worked. But just! There wasn’t much…

“I guess at the end of the straight for Valtteri, he had a bit of a sniff, but fortunately he ran out of laps. So, very happy.” 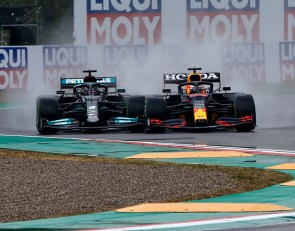