It wasn’t much of a race but Saturday night’s Desert Diamond Phoenix Grand Prix did provide an exciting finish as Josef Newgarden charged from fourth to first in the closing six laps to steal a victory for Team Penske.

When Ed Jones hit the wall on Lap 229, the caution came out and the order was Newgarden, rookie Robert Wickens, James Hinchcliffe, Scott Dixon and Alexander Rossi so it was decision time.

Newgarden pitted for fresh tires while the Schmidt Peterson Motorsport duo and Rossi stayed out to set the stage for a shootout on the one-mile ISM Raceway.

The restart had both SPM cars 1-2, with Rossi third and Newgarden fourth. The 2017 IndyCar champion made quick work of Rossi and Hinch but then things got interesting.

Wickens, who did a tremendous job in his oval-track debut by qualifying fourth, was even more impressive in those first three laps after the restart. Despite Newgarden’s obvious advantage with tires, the Canadian ran the perfect groove and stayed out in front.

That’s when Newgarden used the high groove coming through Turn 2 and swept into the top spot with four laps to go. 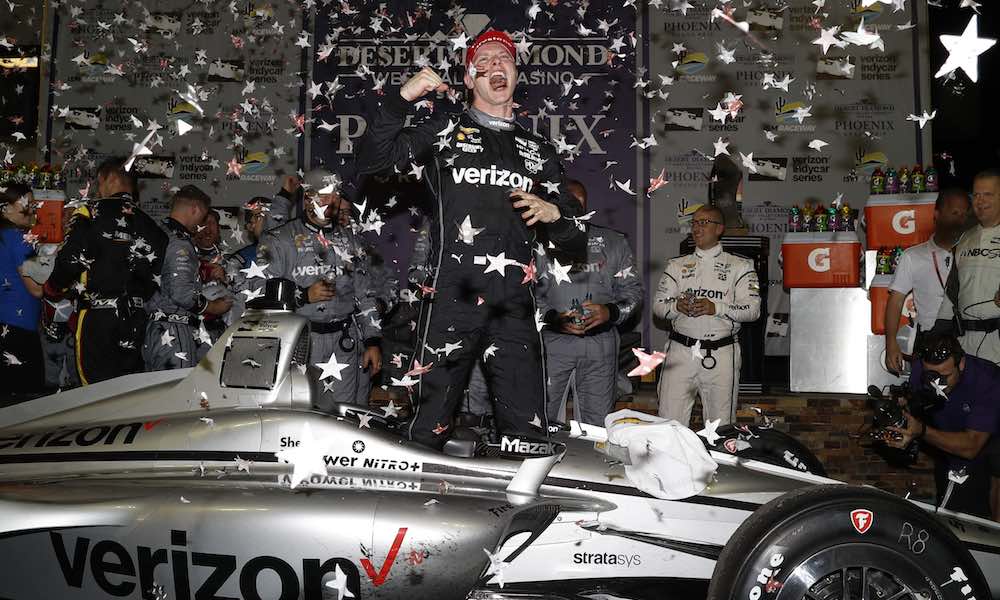 “I couldn’t attack until the end and I’d rather be the attacker but that last pass was a bit risky,” admitted Newgarden, whose used a ballsy pass to beat teammate Simon Pagenaud last year at Gateway. “It was risky but it was the only way it was going to work and I have didn’t have to get crazy high.

“That always makes things more fun, a situation when some guys have fresher tires, and if it wasn’t a good I hope we saved it at the end.”

SPM co-owner Sam Schmidt had the toughest call on racing – stay out or pit and he chose to keep his impressive rookie at the point.

“I was actually hoping more guys would pit but Robert did a helluva job,” said Schmidt. “If we pit we probably finish second or third and that’s where we ended up, so I was proud of our effort.”

Wickens, who was leading the season opener at St. Petersburg until being punted on the last lap by Rossi, continued to perform like anything but a first-year driver.

“All I wanted to do was finish every lap of my oval debut, so to come home P2 and even lead tonight, you can never expect that as a rookie. It’s so hard here but the Lucas Oil team did a great job,” he said. “The car was great all day. James [Hinchcliffe] and I were quick, so I think it’s really encouraging for things to come.”

Rossi came back from a lap down and was the fastest car on the track much of the evening as he came through with his second consecutive podium.

Will Power led a race-high 80 laps before getting into the gray and slapping the wall on Lap 153.

Polesitter Sebastian Bourdais and front-row mate Simon Pagenaud ran 1-2 for there first 60 laps before bumping into a pit crewman during their initial pit stops and both served drive-through penalties that ruined their races.