Pierre Gasly describes fourth place in the Bahrain Grand Prix as like a win for Toro Rosso and Honda after an impressive performance throughout the weekend.

Honda struggled massively during three years in partnership with McLaren, with reliability and performance both lacking and Bahrain last year a particularly low point due to numerous problems. After an MGU-H issue for Gasly in the opening race in Australia both drivers had to take new components this weekend, but the car was competitive and reliable as the Frenchman took a relatively comfortable fourth place after starting fifth.

Asked if the result is like a grand prix victory for him, Gasly replied: “For the team it feels like it.

“It’s the best result for Honda as well since they came back. I think the people in Japan, they must be super happy about it. It’s just great. They had a tough couple of years. It’s a great way to motivate them and show them they need to be pushing. 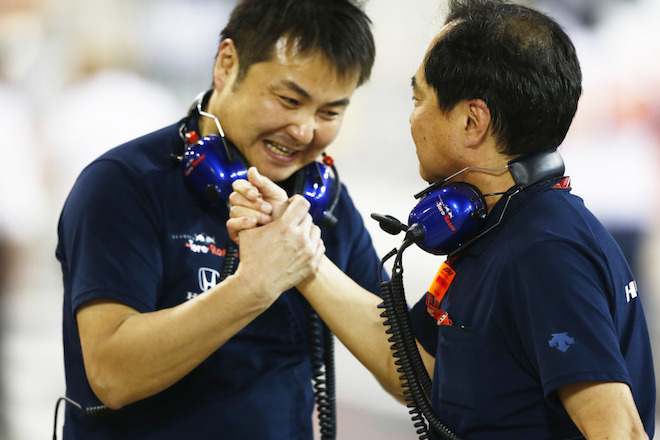 “We did a massive step this weekend. Since we arrived, the car was fast. To have my best qualifying ever in Q3 already was massively satisfying, but I think nothing can beat the feeling that we had with this fourth position.”

While Honda hasn’t finished as high since 2008, the result is also Gasly’s first points of his career and he admits it is a special result.

“For me, honestly, it’s just amazing. I never expected at the beginning of the season to be fighting for this kind of position. Of course as a driver, I’m a super-competitive person and I want to be at the top, but you need to give time to everything. We knew we could struggle a little bit.

“Honestly it’s difficult to explain this weekend. For myself, it was a massive experience and an unbelievable result. To give the best result of Honda in the last 10 years, after the experience I had with them in Super Formula [where] I had quite a close relationship with them… I think it’s just building the confidence of everyone and showing them that we need to keep pushing because we have a good potential this year.

When it was put to him that his first podium will have to be his next target, Gasly added: “Let’s celebrate the P4!

“Of course today was an amazing result, we managed to make the best out of the situation with both Red Bulls retiring and everything. We need to be super happy about today and be objective on the next couple of races. We can’t expect to fight for similar places all weekends and for all the races. Right now I just want to celebrate with the team.”