Cal Crutchlow (LCR Honda Castrol) has taken an impressive third-ever Grand Prix victory in the Gran Premio Motul de la Republica Argentina, besting Johann Zarco (Monster Yamaha Tech 3) and Alex Rins (Team Suzuki Ecstar) on the final lap to earn the honor of winning the 750th GP race for Honda. But the headlines must be shared, with drama for Marc Marquez (Repsol Honda Team) as the reigning champion accrued a number of penalties and clashed with Valentino Rossi (Movistar Yamaha MotoGP), with the fuse on the title fight now fired up and on full power.

There was drama even before lights out at Termas de Rio Hondo, with the conditions hard to judge and the race delayed as the majority of the grid went back into pit lane to switch tires.

That left Alma Pramac Racing’s Jack Miller alone on pole after the Australian didn’t need to switch, and the grid lining up a few rows back in order to not all start from pit lane.

As the field came back around to line up for attempt number two at lights out, however, that wasn’t even the bigger headline – with reigning Champion Marc Marquez (Repsol Honda Team) stalling on the grid and not in his position. The No. 93 was then able to get the bike going and took his position, but had been told to instead start from pit lane…

MORE DRAMA! Now for @marcmarquez93 on the grid!

With that unanswered question hanging in the air, the lights went out and Miller took off from his lonely pole position to get the lead. Dani Pedrosa (Repsol Honda Team) took second, with Zarco initially in third before Marquez struck as the Frenchman had a moment. From there, the rider from Cervera picked his way forward to behind Miller – as Zarco clipped Pedrosa and the No. 26 found himself on a wet part of the track, race ending early as he crashed out but rider okay.

Sure enough, however, Marquez’s pitboard showed the words “Ride Through Penalty” and the next bolt of drama hit the race.

With the remaining Repsol Honda bike heading in, Miller was in the lead and being hunted down by a group of three: Zarco, Rins and Crutchlow, and they were soon on the scene.

But Marquez, when back out on track, was lighting up the timesheets immediately – before an incident saw him get too close to Aleix Espargaro (Aprilia Racing Team Gresini) and the reigning Champion was told to lose one position. That done and the bit then back between his teeth, it was game on for the No. 93 to salvage as much as he could – which, by lap times, seemed it may be an awesome recovery.

Back at the front, Rins led briefly before an error, and Miller then suffered his own – with Crutchlow able to move through to lead from Zarco and the three able to pull away from Miller.

The drama was far from done, however. On the fight back, Marquez had picked off Andrea Dovizioso (Ducati Team) and honed in on the Movistar Yamaha MotoGP duo of first Valentino Rossi and next up Maverick Vinales, until the No. 93 made a lunge up the inside of the ‘Doctor’ – and misjudged it.

Both running wide and forced to sit up, Marquez was able to stay ahead – but the No. 46 went down as he clipped the grass. 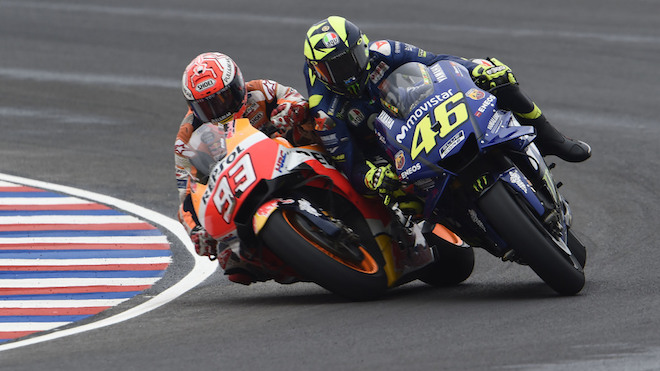 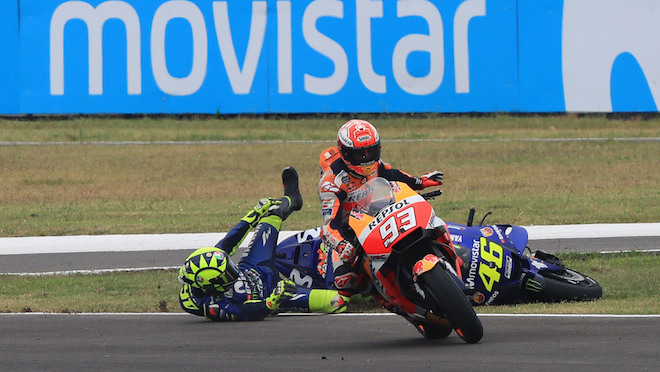 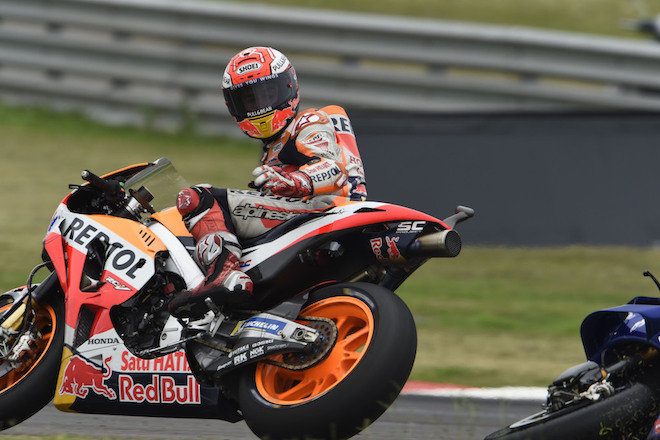 Able to get back in the race and restarted, Rossi was left far down the order as the incident lit the fuse on the race and the rivalry once again.

The fight at the front, meanwhile, became three by the last lap, with Crutchlow and Zarco able to just pull away from Rins to duel it out over the final sector – and the Brit keeping ahead to take a stunning third Grand Prix victory. Zarco took second for another impressive visit to the rostrum, with Rins visiting that podium for the first time in the premier class in third, pulling a big wheelie over the line. 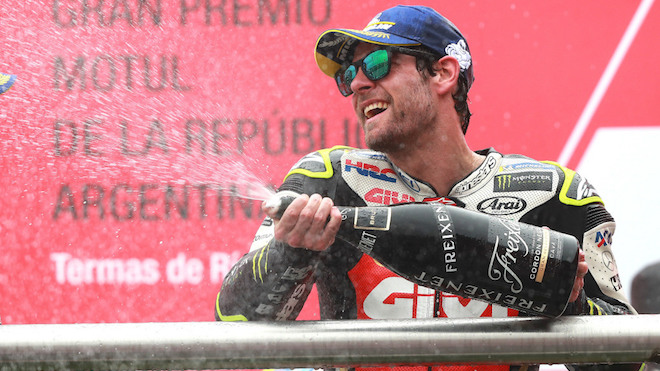 Miller took fourth after not quite being able to make up the ground to the front, ahead of Marquez on track – but not in the results. As the flag fell, another penalty for the No. 93 came up – a ride-through, or 30 seconds added to his race time.

That means Marquez finishes 18th, and takes no points home from Argentina.

The Championship fuse is lit, rivalries are heating up and Crutchlow heads to Texas as the points leader for the first time ever – the first British leader since the 1970s and an Independent Team rider to boot.

Marquez, meanwhile, faces a mountain to fight back – with his first zero of the year marked in the dramatic and extraordinary Argentina GP. Texan turf awaits the king of COTA on Sunday 22nd April.