Bourdais, who was the last driver to make an attempt, edged Team Penske’s Simon Pagenaud (+0.391s) – the defending race winner – and Will Power, who was over 1.6s slower in third.

“I gotta say, every time I jump in that car in quali trims and stuff you think Indy, right?” a trembling Bourdais said, thinking back to his massive crash in Indy 500 qualifying last May. “It stays in the back of your mind, and you fight yourself more than the car I think at some point. It was just a good effort. … Qualifying position was pretty big knowing what I had to go and get. I knew it was going to take a flat 3 and 4, and I wasn’t quite sure about 1 and 2, how much I needed to dig, but the car was really solid.

It’s the 34th career pole for Bourdais, first pole since Mid-Ohio in 2014 and first oval pole since Milwaukee in 2006. He described his attempt as trying not to “overdo it.”

“It’s high tension, high pressure, you don’t breathe very much, you just are really listening to the car, trying to make sure you don’t overdo it. I had a bit too much understeer, I went a click to the left on the weight jacker and then was kinda skating on four wheels, backed that up and drove the understeer a little bit more. Really just didn’t try to take any chances.” 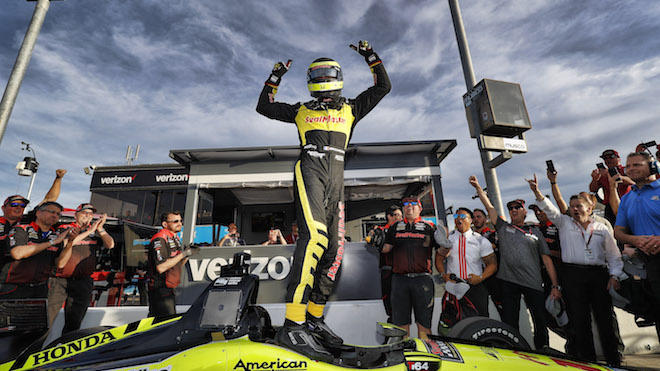 Bourdais’ pole is just the second pole win in the history of Dale Coyne Racing and its first since Mike Conway won the pole at Detroit in 2013.

Alexander Rossi will start fourth after a two-lap average of 186.824mph, followed by the Schmidt Peterson Motorsports duo of James Hinchcliffe and Robert Wickens, who qualified an impressive sixth in his first experience on an oval.

“First oval qualifying I didn’t know, I was a little bit too safe on the first lap especially, and that sets the mood for the whole two laps,” Wickens said after jumping out of the car.

Also impressing with a top-10 start in his series debut is Pietro Fittipaldi, who averaged 184.548mph.

“It was good. Car felt good, engineers did a really good job and gave me a good car in qualifying,” he said. “It was very different in practice compared to the February [test], track’s a lot hotter so cars are moving around a lot. So I was taking it step by step in practice, I think we did a decent job in qualifying. I did my best.”

Marco Andretti, running a special livery in honor of grandfather Mario’s final IndyCar win 25 years ago, will start 20th after his team hustled to fix a fuel issue.

“Halfway through a stint around a place like this things are going to get really difficult, so we need to get the car comfortable from lap 15 to 50 on tires,” Andretti said. “We were just a little bit—a lot – too low on that run, we weren’t expecting the big pace gain, so I was just bottoming everywhere, at the limit of the deck of the car there. We’re going to need to make some headway in the race, we’ll see.” 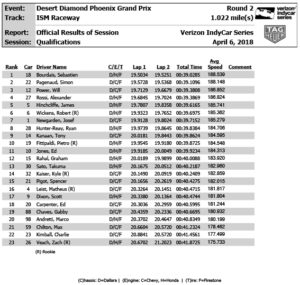