Under the new partnership, Shank will continue to run the Ohio-based outfit and Meyer, CEO of the SiriusXM satellite radio company, will lend his considerable business experience to the program as MSR looks to grow its footprint in motor racing.

“Since day one of this team, it has just been my wife (MaryBeth) and I running it and I hadn’t set out to take on a partner,” said Shank, whose No. 60 Honda Indy car driven by Jack Harvey counts SiriusXM as one of its primary sponsors. “But when I met Jim [Meyer], it was clear how a structure like this could help the team grow in the long term, so it began to make more and more sense. Having a strong financial foundation to build the organization and bringing in a top-level CEO with the kind of commercial background that Jim has is going to help us grow our depth. This is big for everyone on this team, and we’re really motivated to go out and be successful with the tools that we have moving forward.” 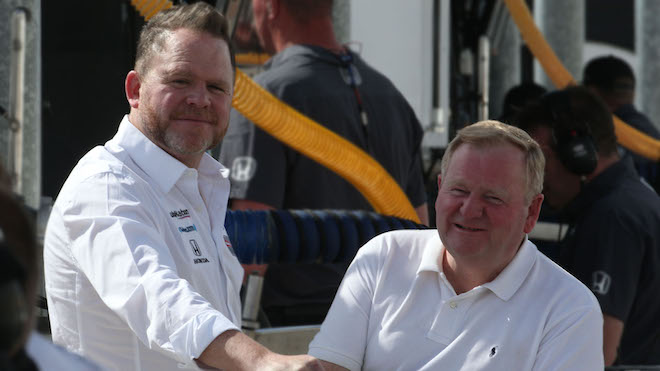 A lifelong fan of racing and the Indy 500, in particular, Meyer (at right, above, with Shank) also made a quiet visit to February’s IndyCar test at Phoenix with Shank where the MSR duo took part in their first team ownership meeting held by the series.

“I have been thinking about a way to be involved in the sport for a long time, but didn’t have a clear path in mind until I met Mike,” said Meyer. “We are very different people, but he really impressed me with what he has done to build this organization and some of the risks he took along the way. I knew early on that he was the kind of person that I wanted to partner with and I really respect what he has done. We share the dream of winning the Indianapolis 500 and I’m really excited to be working towards that with Mike.”

With IMSA’s GT Daytona class scheduled to skip next week’s WeatherTech Championship race in Long Beach, MSR’s IndyCar program for Harvey will be the first to debut with the new team name at the Southern Californian street race.

“It’s nice to hear about them teaming up because I had met Jim and he was the one who decided to come and help me in Indy (2017 Indianapolis 500),” related Harvey. “And the way that Indy played out at the time, it ended up pulling so many people together. It was kind of nice to be able to be the person who introduced those guys (Mike and Jim).

“Mike is one of the best team bosses that I get to work with and the combination with him and Jim is going to be really strong for the whole team. I am happy for all people involved with this because it really is just good people working with good people.”