EVERSLEY: What Alan Kulwicki means to me

EVERSLEY: What Alan Kulwicki means to me

On a Tuesday night in October, 2015, I was sitting at a kitchen table in Ovalo, Texas next to my podcast partner-in-crime, Sean Heckman. Across from us sat famed racing engineer Jeff Braun and his wife Diane. We were only a few days into the first season of “Dinner with Racers,” and weren’t sure if anyone would really listen to us or understand what we were doing. Jeff, who has engineered everything from stock cars at Wisconsin short tracks to prototypes at Le Mans, told us many amazing stories that evening, and while his ‘Level 5’ adventures have received the most attention, his recall of working alongside some up-and-coming stock car driver named Alan Kulwicki was something that always stuck out to both Sean and I.

“He was really hard to get along with. He was pretty driven and if you didn’t work as hard as him, and weren’t as committed as him, he didn’t want you around. He was just too intense for most people. I don’t think there were that many humans on Earth that could keep up with him”

Alan Kulwicki, the college educated boy from Wisconsin, would defeat the best in the business to win the 1992 NASCAR Winston Cup championship, and he did it with his own team, and without the advantage of a family name or an inheritance. What caused us to embark on a 4,000-mile road trip last month to learn more about him, however, was how much of ourselves we saw in him.

The statistics on him are easy to find: the last true “independent” champion, the first with a college degree, the list goes on.

What was captivating to us, however, is the personality of a guy who we both felt like we understood, and with a legacy we hope stands through time. It’s the self-personification of the guy that we wanted to learn about.

Alan grew up in a racing family – his father Jerry was one of the most famous engine builders in the USAC stock car scene. Not known for being warm and fuzzy, nowhere will you find stories of Jerry going out of his way to help Alan in his career. When Alan wanted to go racing, Jerry wasn’t particularly encouraging. As Alan transitioned from karts, to late models, to NASCAR, his father was rarely to be found. If Alan was to succeed, he couldn’t rely on the Kulwicki last name, he had to do it all on his own. Jerry wasn’t going to make any phone calls, offer up a single dime, or generally fix Alan’s problems, it was up to him to figure it out on his own, and that was just their way.

My dad, John, has been a long-time crew chief and mechanic throughout the glory days of IMSA and professional sportscar racing. At no point did good ol’ John Eversley ever make my life any easier when I decided to pursue my own racing dreams. I had to take myself karting, I had to earn my own money, and while the relationship with my parents is genuinely supportive and loving, we also come from a work ethic of earning your way through. My first jobs in the sport were voluntary, they weren’t glamorous, and at no point did Dad ever help me advance quicker. It made for some tough years, but I appreciate that now.

Alan was notoriously difficult to work with. A control freak, a guy who had to take a lot of convincing to do things different than how he planned, tough to let in his circle of trust, and despite a number of family hardships growing up, he was someone who never, ever discussed it.

Reminds me a lot of a guy I sit next to a lot.

Sean Heckman, my co-host, is not known for his warmth, and as one of the more creative minds in the business, he struggles to delegate because he has a hard time trusting a job can be done the way he wants. He has a vision for things, and in such tends to take on an overwhelming number of tasks, as it seems only he can handle the giant list of items it takes to pull his kind of projects off. It doesn’t make him easy to work with, and he has plenty of ex-girlfriends to show for it. He’s also had his share of personal struggles over the years, but much like Alan Kulwicki, good luck getting him to talk about it.

In March, we took a 4,000-mile trip across five states to sit down with 12 people who knew Alan best. While Continental Tire, Acura and Honda have been great partners, this specific project was done out of our pockets. We stayed on friend’s couches, cashed in on sky miles, and my friends at RealTime Racing even let us borrow the team’s Honda Odyssey (hat tip to Nathan Bonneau and PD Cunningham). This wasn’t a labor of love, this was an exploration of a hero.

Sean and I both worked through several contacts to find those who knew him best. My buddy Jim Tretow, host of “The Racing Round Up Show” in Wisconsin, is about as knowledgeable on the area as you can get. Sean would befriend Tom “T.R.” Roberts, Alan’s lifelong PR-man and current leader of the Kulwicki Driver Development Program, who also was instrumental in establishing a lot of contact. Between everyone we met Alan’s best friend, his original car builder, his original crew chief, his championship-winning crew chief (Paul Andrews, who’s still at today!), his truck driver, and even his priest. It was an amazing roster of people, all of whom were happy to tell the story of Alan from their perspective, which is why we felt it critical to spread it across four episodes.

There were some amazing stories. Yes, he was a NASCAR champion. Yes, he started with nothing. However as we learned, he was also very loyal to the people he trusted, he never forgot where he came from, and something especially new to us, he was a massive, massive hit with the ladies.

He’s a guy who stands out on his own merit, but also because he’s someone that we deeply relate to, even though we’ll never know him.

With the exception of our first season, we’ve tried to keep our listeners updated on our travels and unique content that comes from taking a long road trip. On this occasion, however, we decided to keep quiet about what we were up to. Instead, we decided to capture our exploits for a short video travel blog that would show what goes into making our series.

April 1, 1993 was a day that changed NASCAR forever. The sports last true independent was gone, but we hope we were able to shed a little light on who the man really was. 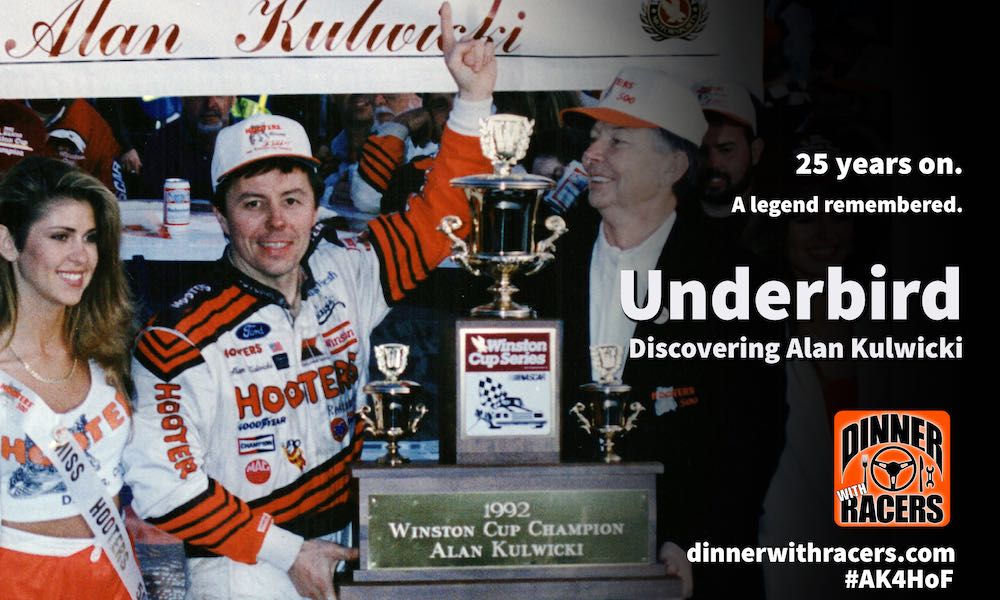