CRANDALL: Could a Kulwicki exist today?

CRANDALL: Could a Kulwicki exist today?

The appeal of Alan Kulwicki was his brilliant, focused and determined mind. It was in the underdog racing on a shoestring budget and taking down racing’s Goliaths.

There is no denying that Kulwicki was one of a kind. Seeing someone attempt to race in today’s NASCAR – where success can be found with multi-car teams and million-dollar sponsorships – as Kulwicki did in the 1980s and ’90s seems unfathomable. Or is it?

In addition to being one of the best in-depth projects ever done on Kulwicki, the four-part “Dinners with Racers” podcast series by Ryan Eversley and Sean Heckman does an excellent job of reinforcing how remarkable Kulwicki’s 1992 championship feat was. The No. 7 team was made up of a fraction of the crew racing on a fraction of the budget their competitors had.

The DWR Kulwicki special provides a new sense of appreciation for those accomplishments. It also brings to mind that owner/driver Jordan Anderson of  the Camping World Truck Series might be the closest thing to a modern-day equivalent.

“One of the things I couldn’t get enough of was the ESPN Classic channel, which was real big. I was six, seven, eight years old and that would be all I would watch, and I still remember watching a rewind of that race in Atlanta when [Kulwicki] won the championship,” Anderson tells RACER.

“I remember thinking how cool that was as a kid watching the whole deal, from having Underbird on the front nose, to owning his own team and all the calculations he was doing during the race. I just thought that was really cool, that he was basically making all that happen from the driver’s seat.

“Fast-forward to all these years later to how we’re running our team, it’s really cool, and I appreciate what he did so much more. It’s really what we’re trying to do, build this team up and why I can appreciate so much what he did back then. I look at him as kind of a role model for what we’re doing.”

When Anderson branched out on his own this year, he looked at using the No. 7 in honor of Kulwicki. Unfortunately, it wasn’t available. The parallels between he and Kulwicki are still there, though.

Per race weekend, Anderson estimates it is a 10-to-1 ratio for what the bigger CWTS teams might spend compared to his. He also has a small number of helping hands, and like Kulwicki, Anderson is just as involved when it comes to his operation.

Last season, Anderson didn’t buy a single plane ticket. Races are made by crisscrossing the country, with his group taking turns driving the modest hauler. Anderson purchased the hauler in 2009 and its journey has consisted of dirt late models, asphalt late models, NASCAR K&N and now Truck Series racing.

The 40-foot enclosed gooseneck trailer is big enough to fit “one truck, no backup truck, it holds our garage box, our pit box, and the cooldown unit”. Anderson has four trucks in his stable:

“It’s definitely presented new challenges being a team owner this year,” says Anderson. “But being able to be the driver/owner and race differently and try to be, as you mentioned, like Alan when he ran his team in being strategic every lap with moves you make and how you calculate your races to make sure your team survives and you’re able to build every week.” 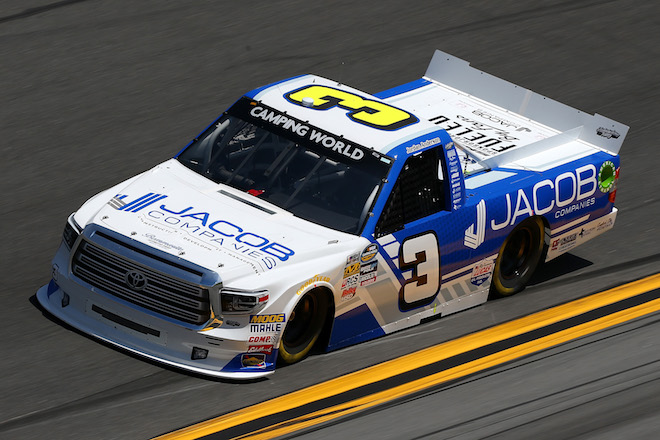 In the DWR special, Kulwicki crew chief Paul Andrews estimates that at one time the team had just seven people. That was nearly as many cars as Kulwicki had at his disposal. Meanwhile, the competition, like Richard Childress Racing and Dale Earnhardt, had “probably double” those resources.

The makeup of Anderson’s team is simple: it’s him and three others. Friends on other teams pitch in when needed. Niece Motorsports has given Anderson’s team space in the back of their shop to work out of, and Anderson has gratitude for being allowed to use resources such as a setup plate and machinery.

“The biggest thing we have to overcome is just the personnel,” Anderson says. “These other teams, there’s seven or eight guys at the racetrack, and each one does a specific job, and they have guys that are back at the shop still working. We don’t have that, and we don’t work a 7 to 5 p.m. schedule. A lot of times it’s 7 in the morning until whenever. There’s no cap on when it ends, and it includes doing whatever is needed.”

Kulwicki was hands-on with his team in many ways. Every decision that was made, Kulwicki knew about and had input. Behind the wheel, he was even smart enough to contribute to fuel mileage calculations.

Such a mentality can also be found with Anderson. Granted, he’s probably not working out fuel mileage, but in addition to driving the hauler and balancing the books each weekend, Anderson writes and sends out his own press releases.

“Each of us kind of holds the title of whatever it takes under the job description,” he says of his small group. “Whether it’s driving to the racetrack or working on the truck, putting decals on, hustling tires at the track, working on setup, really doing whatever it takes to get that thing ready.

“I know my guys want to be the latest and greatest of parts for these trucks, but sometimes we got to go out, scrounge around and find used parts to put on it because it keeps the team in the green. It definitely makes you appreciate everything that much more.”

“The odds were always stacked against him, but he prevailed,” long-time Kulwicki public relations representative Tom Roberts says in the DWR special. “And many people would label that as being impossible, but it must not have been impossible because Alan was able to do it.”

Realistically, what Alan Kulwicki did and the way in which he did it will never be repeated. But Jordan Anderson is going to try to follow his lead to his own version of success.

“In the ’70s and ’80s driver/owners weren’t a rarity back then; that’s what those guys basically had to do because big team owners and all this stuff didn’t exist. And those guys love to race and they did whatever it took to get to there, and I think that’s what our team is all about,” says Anderson. “We love to race and if it wasn’t for us doing it the way we do, we wouldn’t be able to go to the racetrack.

“We’re kind of doing it on our terms and doing it our own way and a lot of people may look at what we do and think that it’s crazy but it’s working for us and allowing us to grow this deal and we’re able to be at the racetrack every week.

“And there’s some sense of fulfillment when you get to do things your own way, and it works. I remember as a kid everybody said unless you got the millions of dollars and this and this, you’ll not even make it to the K&N Series and being able to do it now at the Truck Series and do things our way, it’s really incredible blessing to even being here competing at this level, and to look at a guy like Alan [below, in Victory Lane, Phoenix ’88] as motivation for us.” 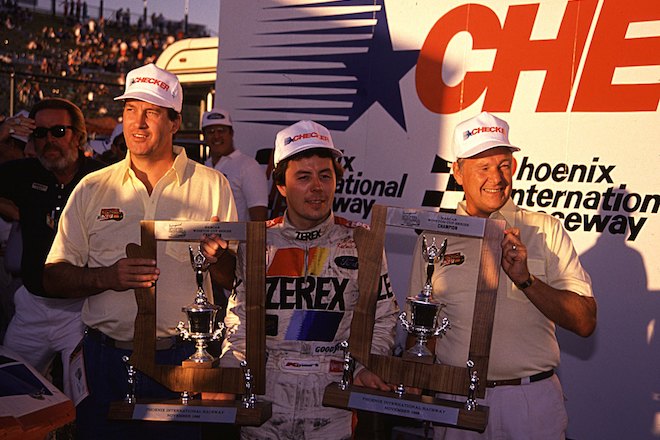