The fourth round of the 2018 FIA World Rally Championship takes the contenders back to Europe and the Mediterranean ‘Ile de Beauté’ for the CORSICA linea – Tour de Corse (5-8 April), France’s round of the series. As the first tarmac event of the year it will present yet another fresh challenge following the three specialised rallies that have opened the season.

While the route has been heavily revamped and will run in parts of the island not used in competition for years, the challenge remains the same. Narrow and relentlessly winding mountain roads await the crews and the abrasive asphalt is tough on tyres. Factor in potentially inclement weather in the hills and France’s round of the Championship is another classic on the calendar as well as a tough physical challenge for those behind the wheel.

After an impressive return to competition at Rally Mexico, multiple FIA World Rally Champions Sébastien Loeb and Daniel Elena will again be back in action on the island. The French/Monegasque pairing have four consecutive victories to their name (2005-2008) and could again be a force to be reckoned with against the regular Championship contenders. After his victory last time out in Mexico, Sébastien Ogier is back at the top of the standings with a four-point advantage over Thierry Neuville. Both have one victory apiece on the island and they, along with Loeb and Jari-Matti Latvala, are the only drivers on this year’s entry list to have taken a WRC win in Corsica. There is a strong field of entrants in the FIA WRC 2 Championship category and Corsica is the second round of the FIA Junior WRC Championship where the crews are all competing in identically prepared Ford Fiesta R2s. The rally is also the second of five events in the FIA RGT Cup and no fewer than seven crews will take the start in Porsche and Abarth machinery.

SS7 on Saturday and the closing Power Stage (SS12) will be broadcast live on television, while all stages are available live on WRC All Live on the WRC+ platform. 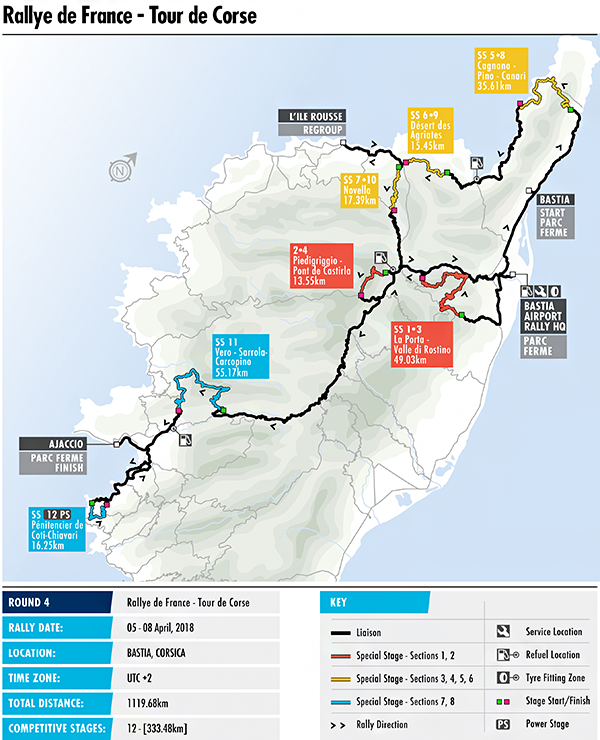 For the first time since 1978, Bastia will host the ceremonial start on Thursday evening before the competition gets underway on Friday morning. The first stage will be a sharp wake-up call at 49 kilometres and is one of only two retained from last year. The second – Piedigriggio–Pont de Castirla – has not been used in the WRC since 1999. Both stages are run twice before the crews head back to the Bastia service park via an autograph session in town. On Saturday, another three stages, both repeated, await the crews and again two of the three are new to this year’s itinerary. Sunday, which heads south-west to the Gravona valley, will be no cruise to the finish. The day kicks off with the longest stage of the event – Vero–Sarrola-Carcopino at 55.17 kilometres – before an all-new Power Stage closes the action. Surviving crews then head to Ajaccio for the podium and prize-giving ceremony.

The Accreditation Centre is located in the Media Centre in the Salle Polyvalente, Route de la Gare, 20290 Borgo. The opening hours are: