Sonora Rally - The adventure of it all

Sonora Rally - The adventure of it all

We did a thing. We entered a 2015 Jeep Wrangler Sahara in the Safari class of the 2018 Yokohama Sonora Rally. Our intention was to follow the race, activate Team Yokohama parkour/freerunning athlete Sydney Olson, and show off the Geolandar M/T G003 tires’ capabilities. Yokohama wanted to cross-over an athlete in the hopes of bringing new eyes to the off-road world and vice versa. It’s all very strategic. But then comes the reality and execution of it all, which turned every step into its own adventure.

The planning and Jeep setup required lots of assistance from my much-abused brother, Kyle, and the wonderful Dan Fresh at OC Motorsports. They believed in our project and helped with things like race radios, GPS, shovels, and helmets. Not to mention the Jeep. It was borrowed from another Team Yokohama athlete, pro skateboarder, Beaver Fleming. And I’m sure Sonora Rally co-founder Darren Skilton wanted to stop reading my text messages weeks ago because of my endless worries and questions. We were piecing this project together – it takes a team and self-sufficiency all at the same time to do a rally raid like the Sonora Rally. And I think we found our balance once we hit the road for Mexico.

We have a passionate team of athletes at Yokohama with shared interests in cars and trucks, whether it’s overlanding or racing or wrenching. Sydney Olson was probably the least experienced of the athletes in this regard. That made her the perfect choice. Her youth, energy, and adventurous spirit comes through in everything she does. She accepted the challenge without asking any questions and with very little information. I was impressed. She was eager to explore the world in a new way and embraced every moment of our adventure. I watched other teams struggle with chemistry between driver and navigator – something we never did. Thankfully, because I put poor Sydney in some uncomfortable situations…

Sydney and I first experienced the fun of Rally Raid navigation in the Rally class two nights before the rally. We were learning a foreign language – literally. The road book notes use Dakar-style abbreviations – that means French. We quickly asked for the secret decoder ring. Then there’s that Rally Comp thing. A sequence of numbers and a foreboding arrow on a little box with a beep that kills your ear drums and is connected to some all-knowing being that sends you messages every now and then. We were both overwhelmed and I think both quietly questioning what we had gotten ourselves into.

The prologue was a genius move. A quick jaunt in the desert outside of San Luis Rio Colorado, Sonora, Mexico, meant to give us a chance to test our skills (or lack of) and determine starting order. We were definitely tested but we passed. In fact, we were pretty proud of ourselves. Sydney discovered her inner nerdy navigator and I trusted her. She delivered notes evenly and calmly even though she wasn’t always feeling it. It was fun for me to share my off-road passion and knowledge with a kick-ass woman like Sydney.

Armed with our newfound and still unearned confidence, we started the Sonora Rally. Day one was San Luis Rio Colorado to the bivouac in El Golfo, by way of those seriously huge dunes in the Sonora Desert. I swear I’m not exaggerating about their size and expanse. That was validated at the end of the day in the bivouac when it was all anyone could talk about. Experienced guys like Casey Currie and Kellon Walch were blown away. That made the rest of us feel a bit less wimpy. 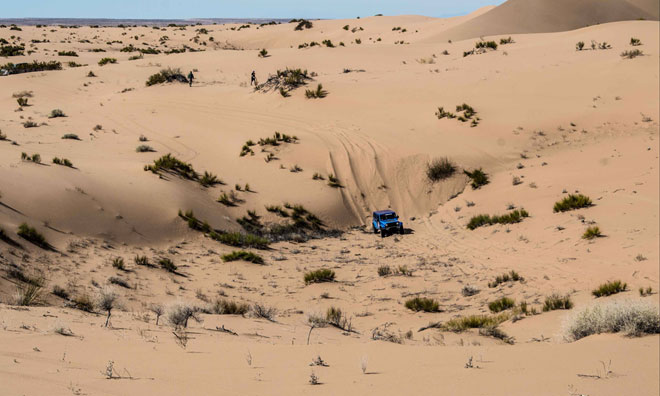 Those dunes. I had experience in dunes like Glamis and other desert exploits in Jeeps, on motorcycles, in off-road race cars. Sydney did not. She had never done anything off-road before – everything was new to her. And to start out in the dunes… I felt for her. Her first crest over a dune peak when all she could see was the sky and her first steep down the slippery side of a dune left her a bit shaken. She’s an athlete accustomed to control, and she gave all of that to me. Not an easy task. Yet, she never complained or yelled or freaked out. But I knew.

We’ll never forget waypoint 49 on Day 1. That thing was on the other side of a huge dune the Jeep couldn’t tackle. No big deal, just go around. Well, going around meant being a full 6km away from the waypoint in our effort to pick our way through and around lots of other dunes in the way. There was definitely a celebration when we got that one. Where we went left, right would have been shorter but we still made it. We were alone in our quest. No tracks to follow, no communication with others. Except that mysterious message on the Rally Comp that said, “Good Job.”

During that excursion, we took a break for Sydney to test the dunes and let off a bit of steam with a line of flips that left me (and some local support guys) in awe. The sound of Sydney hitting the dune for each move was hollow and pure power. We did that as often as we could. Each day she would explore the villages to find a wall or steps or any obstacle to jump, flip, twist, or vault over and around. She brought her sport to remote parts of Mexico, all the while, earning the respect of seasoned racers for her new navigation skills. Mission accomplished.

Our two days in the dunes were epic, but on Day 3 we were ready for something different and it happened. We took off out of El Golfo and headed across the desert and found ourselves on fast trails, and a tight sand wash complete with NASCAR-style banking in the turns. The terrain changed quickly over the last two days. We watched the cactus and blooming desert come to life. We had to race to beat the high tide. All the while, tackling the same road book and navigation challenges as the racers, although our routes were shorter and our times longer. 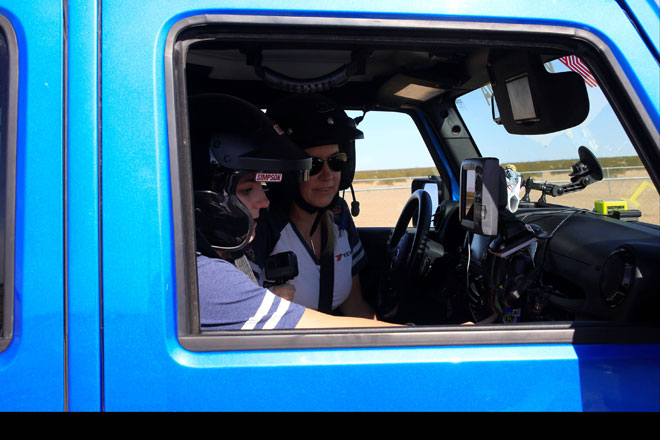 Despite the stress and more than I anticipated in prep work, the event was a success for Sydney and I. Sydney showed off her freerunning moves in the dunes, at the stage start, and off of our Yokohama tires. And we finished. Every day. With big smiles. We couldn’t help it. We accomplished so much and became fast friends. We didn’t get stuck or lost (OK, maybe a wrong turn or two).

We tested our limits in so many ways. We survived and so did our new friendship. The same can be said of the Jeep. Everything we asked for, it delivered. Safely and in comfort. We also put the new Yokohama Geolandar M/T G003 tires to the test. Dunes, rocky, rutted roads, washboards, desert brush…so much variety and so much performance. Even in those sandy washes where sharp rocks hide in wait for a sidewall, we sailed through. We put on lots of road miles as well, and that’s when we appreciated their quiet ride – we could actually hear ourselves talk over the sound of the tires. Tires are an important part of any race program and our little Safari fun wasn’t any different. One less thing to worry about makes all the difference. 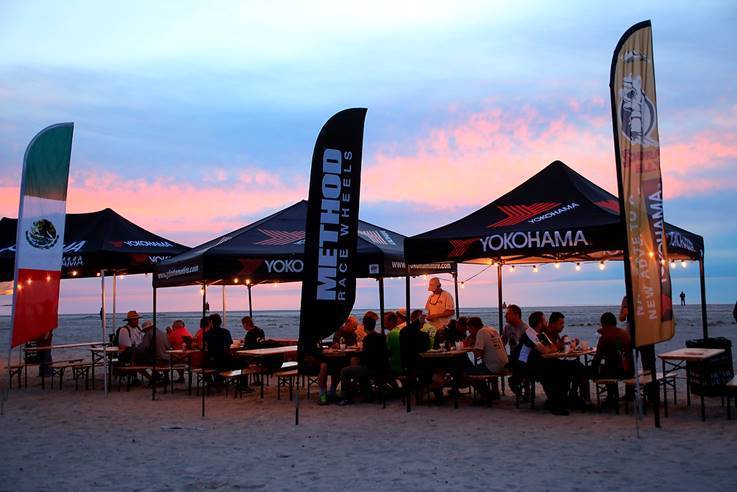 The nightly bivouac comradery was just right. The racers and crew mingled and ate great food and retold the stories of the day. The time together is what makes rally different. Sharing only goes so far though, advantages must be maintained whenever possible. That’s racing. And that never changes.

A huge thank you to Erin-lee and Darren Skilton, and Scott Whitney for sticking with their vision to bring Dakar-style Rally Raid to North America. Many of the racers were there to train and test themselves and their rides/drives for the big daddy, Dakar. Suddenly, Dakar seems much more attainable, and with a proving ground like the Sonora Rally, entries will have a better idea of how to be successful. Traditional desert racing, like the Baja 1000, isn’t a good measure of the challenges faced in rally raid. 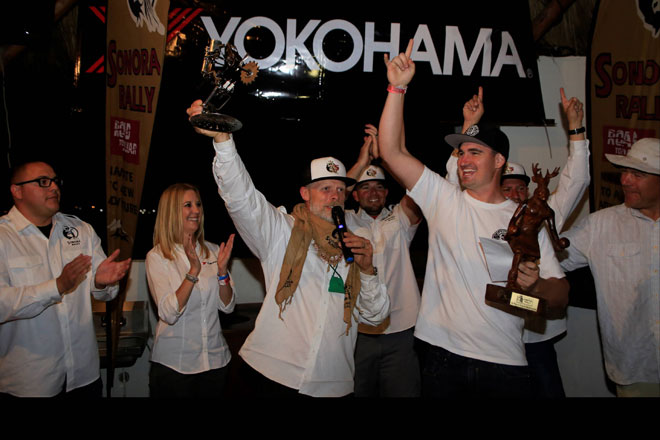 It takes months of work, volunteers, local politicking, pre-running, and those road books to pull off an event like the Sonora Rally. Measured growth and close attention to education and training is what will keep this event on track and keep racers coming back for more.

And oh yeah, that huge sense of accomplishment. We did a thing. A really big, badass thing.

How to drive a Trick Truck: Part 1