Joey Bickers: Never give up

Joey Bickers: Never give up

Joey Bickers has competed in only two of the last four years since claiming a Team USA Scholarship and displaying enormous potential in 2013. Now he’s back, and excited about his prospects after joining championship-winning McCumbee McAleer Racing in the Battery Tender Global MX-5 Cup Series with an eye on a career in sports cars racing:

Hi everyone, I’m excited to tell you I’m back in action! In the four years since my trip to England with the Team USA Scholarship, I’ve had two off seasons and two full seasons of racing, one being in 2014 with Mazda MX-5 Cup, where I finished fifth in points, and the second in 2016 with Pirelli World Challenge in the TCA class, where I finished second in points. It was difficult for me in the two alternating years, not being able to compete and essentially watching my competitors from the sideline, but it’s provided me with an even greater sense of motivation to prove that my passion and commitment to racing is not to be taken lightly.

In the off times from racing, I’ve kept my mind and body strong by participating in other hobbies such as playing ice hockey and spending hours in the gym working on my physical fitness, all while working full-time as a purchasing manager for an auto parts manufacturer in Southern California. From a mental and physical standpoint, I feel I have gained so much in the last four years. I’m now a much stronger, more mature person, mentally ready to take on any challenge.

Now, onto the present – I’ll be racing in this year’s Battery Tender Mazda MX-5 Cup series…and the first races are fast approaching at Circuit of The Americas, which is one of my favorite tracks. I’ll be competing with the support of McCumbee McAleer Racing, the championship winners from last year. I’m very proud to be competing with a team that has proven itself with results and gives its drivers every opportunity to win races.

We recently took part in the series’ pre-season official test at Barber Motorsports Park where we were able to post quick times placing ourselves in the top three in each session. Aside from pace, we were also able to achieve our goals in terms of setup, and have a very strong baseline going into COTA. Working with the MMR team for the first time was nothing short of a pleasure. They are a hard-working, professional group that is dedicated to winning races, and it shows in their results. To say I’m very happy to be there would be an understatement.

There will only be a couple of 30-minute practice sessions and then it is straight into qualifying. Fortunately, I’ve developed a strong confidence in my driving ability at this track. This will help me in achieving my goal of establishing momentum from the start of the event and all they way through the weekend. I know that the keys to winning this championship are to consistently finish up front and stay out of trouble. I truly feel like I’m in position to make this happen and it is all up to me in the car to deliver the results. I do feel pressure, but in a way that appreciates the importance and opportunity I have in front of me, and the need to capitalize on it. 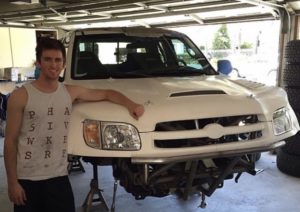 Having not competed in a full season of racing since 2016, aside from a few off-road truck races – which were interesting, to say the least! – I’m very grateful to get back to it and prove myself to be a winner again. I’m dedicated to reaching my goals and it will show in my results on track. I have been training harder than ever, working in the gym five-to-seven days a week. I have improved my strength and endurance, all the while preparing my mind for the tall order that comes with pushing myself on the racetrack. During the past few months I have really stepped up my training routine and standard for physical and mental fitness. I have intense aspirations to make my way up the racing ladder and this season of racing is part of the steps I am taking to achieve my goals.

I’m excited to get things going at COTA. This first race back after a long year of not competing will be a test for me, a test that I feel prepared for and I’m ready to show that. Thank you to all my supporters and people that have believed in me and helped me get this far. 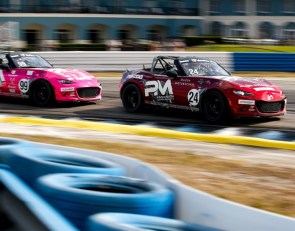 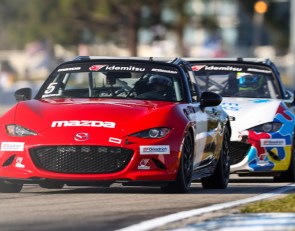