Sam Bass (pictured above with Kyle Busch) is more than the officially licensed artist of NASCAR, he’s one of the friendliest people in the sport and a big race fan! Sam joins the Kelly Crandall Podcast to provide an emotional update on his health battles and talk about what he thinks of NASCAR today. That includes who he sees as the stars of the sport, great moments at Martinsville Speedway, rivalries, seeing the No. 3 back in victory lane at Daytona, how he would retire numbers in NASCAR, and who would be on his Hall of Fame ballot. Of course, Sam has great memories of Alan Kulwicki, Dale Earnhardt Sr. and many more. Plus, hear what his idea was for an invisible race car… 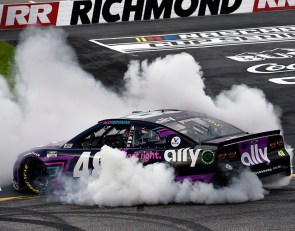