Above: (From left to right) Melissa Eickhoff, Charisse Whiteside (Sonora Rally volunteer and road trip buddy) and Sydney Olson are about to begin their Yokohama Sonora Rally adventure.

For the fourth year, North America’s only Dakar-style Rally Raid – the Yokohama Sonora Rally – is set to begin on Tuesday from San Luis Rio Colorado, Sonora, Mexico, with four days of navigating dunes, trails and primitive roads until the rally ends outside Hermosillo, Sonora, Mexico. In total, the race has a record fifty entries – the max for 2018. Eighteen of the competitors are entered in the “Road to Dakar” challenge in which the first-place motorcycle rider will win a fully paid entry into the 2019 Dakar Rally.

And somehow… I find myself participating in the Safari Class.

The Yokohama Sonora Rally began a few years back as the vision of founders Darren Skilton and Scott Whitney. They wanted to bring the spirit and navigation of Dakar-style Rally Raid to North America, ultimately to serve as a training ground for the iconic Dakar Rally held each year in South America, as well as open up the beautiful culture of Sonora, Mexico to a new audience. The terrain is unique and challenging – including a literal sea of dunes – an Erg, and the local people inviting and amazed by the sight of a race coming through their villages and lands.

As plans to promote the Sonora Rally were brainstormed, at some point, entering in the Safari Class seemed like a great idea. It’s a way to follow the race while experiencing some of the same challenges as the race entries – learning navigation skills, keeping a cool head, and traversing the Sonoran terrain. To put it in the latest lingo – I’d describe it as extreme overlanding. Instead of spending a bunch of money simply to chase the race, we are now IN the Rally. To be clear, the Safari Class isn’t a race – we’re being judged on our navigation skills and sunny disposition. So, maybe we have a chance…

We… I invited Team Yokohama parkour and freerunning athlete Sydney Olson along for the adventure. Sydney is an amazing athlete and clearly has a great sense of adventure. She’s agreed to ride in a Jeep with one of her sponsors, to participate in a motorsports event (something she’s never done), to learn how to navigate in a foreign country, and bring some parkour moves to showcase the Sonora terrain. I’ve navigated in the NORRA Mexican 1000 (two times finishing first and a third in class) and have a second in class at The Mint 400 – but even with some desert racing experience, everything about the Sonora Rally feels brand new. I truly feel that Sydney and I are doing this rookie thing together. 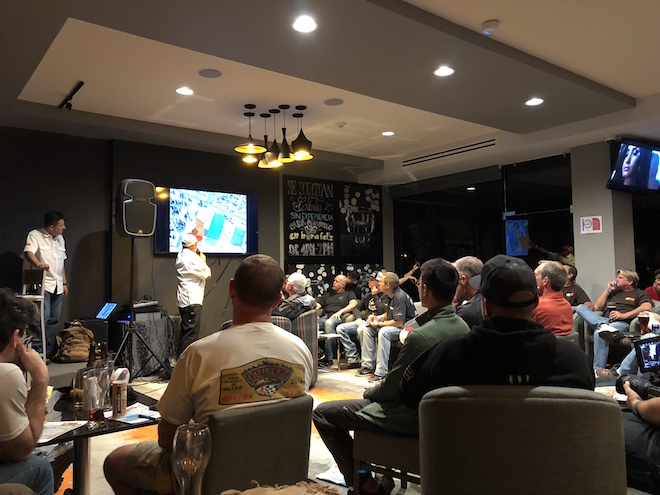 And so we are – in San Luis Rio Colorado, Sonora, Mexico, going to a rally class (above, led by Yokohama Sonora Rally co-founder Darren Skilton), prepping for our adventure in a borrowed 2015 Jeep Wrangler Sahara (expertly prepped by my generous and forgiving friends at OC Motorsports), packing our snacks, and a few tools I’m not sure I know how to use. But like everything else I’ve done in the motorsports world, I’m going to learn something about myself and make new friends – something I can’t wait to share with Sydney.

Follow our adventures and get race updates this week on RACER.com and social media.

How to drive a Trick Truck: Part 1