More than four years after winning two races in the 2013 Cooper Tires USF2000 Championship Powered by Mazda, Alexandre “Alex” Baron marked his return with the new Swan-RJB Motorsports team by scoring an impressive victory from the pole in this afternoon’s Cooper Tires USF2000 Grand Prix of St. Petersburg Presented by Allied Building Products.

Igor Fraga (Exclusive Autosport) and Lucas Kohl (Pabst Racing) finished second and third to illustrate the wide-open nature of this year’s USF2000 title chase by ensuring that six different drivers and teams were represented on the podium during the first weekend of what promises to be a thrilling season. Up for grabs is a Mazda Scholarship valued at $325,000 to assist the series champion in graduating to the next step on the Mazda Road to Indy – the Pro Mazda Championship Presented by Cooper Tires – in 2019.

The 25-car field made a fine sight as the green flag waved under picture-perfect conditions on the famed St. Petersburg street circuit which winds its way close to downtown and along the harbor front, and also includes one of the main runways on the Alfred Whitted Municipal Airport.

Baron, 23, who lives in Narbonne, France, and holds dual British and French citizenship, made full use of his pole position to lead from Fraga, who started alongside him on the front row. Kohl, who is coached by former F1 and IndyCar racer Roberto Moreno and is beginning his third season of USF2000 competition, slotted into third ahead of British Formula 4 champion Jamie Caroline (BN Racing) and yesterday’s winner Kyle Kirkwood (Cape Motorsports).

Baron, Kaylen Frederick (Pabst Racing) – who ran sixth in the early stages – Kohl and Caroline traded fastest race laps during the opening handful of laps before Baron asserted himself as Fraga was forced to focus on intense pressure from behind.

First to challenge him was Kohl, who dived for the inside under braking for Turn 1 on Lap 4, only to run in too deep and relinquish two places – to Fraga and a close-following Caroline. Five laps later, Caroline tried an identical maneuver – with a similar result as Fraga was able to regain his second position. The only difference was that Caroline was able to maintain third, as Kohl had fallen into the clutches of Kirkwood.

As Baron romped clear, Fraga and Caroline continued to squabble over second place, with Kohl resolutely holding onto fourth despite continued efforts from Kirkwood.

After a brief caution period on Lap 20, when a strong run by Pabst Racing rookie Rasmus Lindh (who climbed from 14th on the grid to sixth), ended in the wall at Turn 13, Baron timed his restart to perfection and took the checkered flag well clear of Fraga. The race actually finished under caution after Mexican Manuel Cabrera (Exclusive Autosport) found the wall in Turn Eight.

Behind, Kohl sneaked past Caroline at the restart for third ahead of Kirkwood, yesterday’s runner-up finisher Jose Sierra (DEForce Racing) and Zach Holden, who made up a couple of places at the final restart. Calvin Ming (Pabst Racing), Frederick and Kory Enders (DE Force Racing) completed the top 10.

“This is great. I haven’t had a victory in such a long time so to come back and be in victory lane is something special,” Baron said. “It was great, starting on pole and being able to pull out a gap. I didn’t overreact on the restarts and kept focused. The team did a great job prepping the car in such a short amount of time.

“Only two weeks ago, I had no idea what I would be doing this season! We only got a couple of test days so to get in the car and pull this off is an achievement for everyone.”

Kirkwood’s fifth-place finish ensured he will leave his native Florida with the points lead, 48-41, over Sierra, while Mexican-owned DEForce Racing holds a two-point edge over St. Petersburg-based Cape Motorsports in the Team Championship. The series will reconvene at the Indianapolis Motor Speedway on May 10-12. 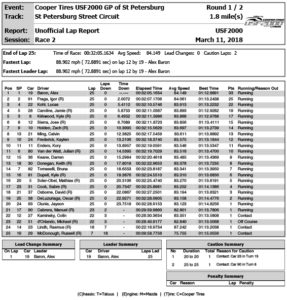