After a dominant weekend in Atlanta, Kevin Harvick will join an elite club with his next checkered flag.

As a reminder, Harvick won both the Xfinity and Monster Energy NASCAR Cup Series races a week ago. Those pair of wins put him at 99 across all three NASCAR national series. Should Harvick find his way to victory lane in Sunday’s Pennzoil 400, he would become just the fourth driver to crack that triple digit club.

Sitting ahead of Harvick is David Pearson, who has 106 career wins. Pearson won an impressive 105 in the Cup Series and has a lone win in what is now the Xfinity Series.

Second on the list of Kyle Busch. Busch has been a force throughout his NASCAR career, with his 183 wins coming through 43 in Cup, 91 Xfinity Series wins and 49 Truck Series victories.

Of course, the standard was set by Richard Petty, who sits atop the wins column with 200 victories.

Harvick is not entered in this weekend’s Xfinity Series race and admitted Friday at Las Vegas Motor Speedway he had not been keeping count of his growing wins total. In fact, his sitting on the doorstep of 100 wins was only brought up this past week.

“Now that I know, it would be pretty cool to break 100,” Harvick said. “I think that for me, it’s just a reminder that you have been here for a long time and fortunate to have a fair amount of success in all three series. It’s a fun stat.

“Coming to Stewart-Haas Racing [in 2014], it re-energized me and enthused me about everything that is going on. It’s definitely not a bad stat. Definitely something that’s kind of fun to see.”

Harvick’s breakdown of wins is 38 in the Cup Series, 47 in the Xfinity Series and 14 in the Truck Series.

For the record, Busch has more chances to add to his total this weekend: Kyle is running in all three races at Las Vegas. 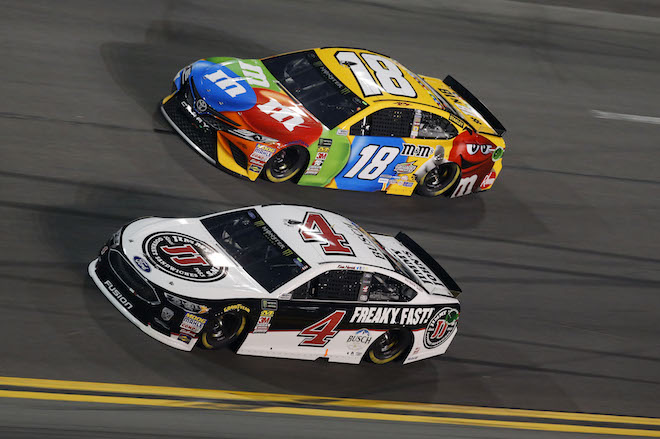 “This day and age is different than the old day and age. People will have that argument forever,” Busch said of the milestone. “I don’t think there is a comparison to that. I think for what Harvick and myself have been able to do with the amount of wins that we have in all three series is cool. I think if you reach 100 – I mean, that’s a big number to reach in this sport [with] how difficult it is to win races these days, whether it’s Cup, Xfinity or Truck. You look at it last weekend – it seems to be easy and you have a pit stop problem and you don’t win.

“Harvick, I think he’s got just four or five less Cup wins than me and he’s a few behind on the Xfinity side. Over the course of the last few years, we’ve been really good at racking them up over there and the Truck side, too. But he’s obviously reaching that 100 mark and I think that that should be something to be proud of. I know I’m focused on me and being able to continue my climb and getting to the next wins that I can.”