Scuderia Corsa and LEGO Speed Champions are partnering to bring the No.63 Scuderia Corsa Ferrari 488 GT3 that won the 2015, 2016 and 2017 GTD IMSA WeatherTech SportsCar Championship into LEGO bricks.

The set features a mini racing driver in the likeness of two-time GTD champion Christina Nielsen that can be placed inside the car through the removable windshield, a trophy and authentic design details including racing colors and race-graphic stickers. 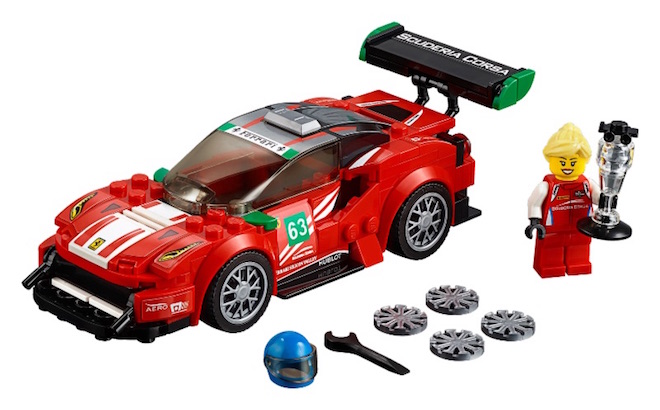 “To partner with Ferrari and The LEGO Group on its 60th anniversary and bring our No. 63 to life is a dream project,” said Scuderia Corsa team owner Giacomo Mattioli. “We’ve had outstanding results with the No.63 Scuderia Corsa Ferrari 488 GT3 the past five years, and the LEGO Speed Champions set is a powerful way to tell our story, hopefully inspiring the race drivers, engineers, and designers of the future.”

Nielsen won back-to-back GTD titles with Scuderia Corsa and co-driver Alessandro Balzan in 2016 and 2017, and is looking for her third straight title this season in the No. 58 Wright Motorsports Porsche 911 GT3 R with new co-driver Patrick Long.

“I cannot believe it is becoming real,” Nielsen said. “I still think it’s unreal. I need to get one myself, I haven’t got one yet, or two, or three, or four, but yeah, it’s absolutely amazing. My life feels 99 percent complete. The last percent is I need to have a Porsche in LEGO as well.”

At next month’s Mobil 1 Twelve Hours of Sebring Presented by Advance Auto Parts, Scuderia Corsa will unveil a larger, 1/8-scale LEGO model. The team also is planning fan contests throughout the race weekend with No. 63 LEGO Speed Champions sets as prizes. More details will be available on the team’s social media channels.

The No.63 Scuderia Corsa Ferrari 488 GT3 LEGO Speed Champions set will be available to order at LEGO.com/shop starting March 1, with a recommended retail price of $14.99.