When Cameron Das was introduced as a new driver for Carlin Racing’s Euroformula Open team on Wednesday, it came as no surprise to Bertil Roos Racing School President Dennis Macchio. After all, he sees many similarities with the talented teenager from Baltimore and a Formula 1 legend.

When Das attended Bertil Roos Racing School in the spring of 2015, Macchio saw a driver of diminutive stature, extremely quiet and shy. As someone who has trained a large number of drivers over the past 30 years, Macchio knew that talent, drive and ambition are not always apparent with that first glance. Once Das took to the track, Macchio immediately thought of four-time F1 World Champion Alain Prost.

“During the very early stages of his inaugural school, Cameron began to make an immediate impression,” Macchio said. “What I caught onto very early, was an inner drive to succeed, an absolute passion for racing, and above all an intense desire to learn. Cam was like a sponge. I couldn’t teach him enough, and he only needed to hear things once.

“While I am a believer that courage in our sport is sometimes overrated, and intellect often underrated, Cam almost immediately showed that he had both in spades. An incredibly quick learner, who could apply his new found knowledge on track almost immediately. Honestly, it challenged me, as his instructor, to be on my game as well.”

By the second day of the school, Macchio realized he was working with someone special. The quiet exterior masked an incredible fire inside, an enormous ability to learn and apply, and a personality that Macchio knew would ultimately fulfill the out of car requirements for an aspiring professional. 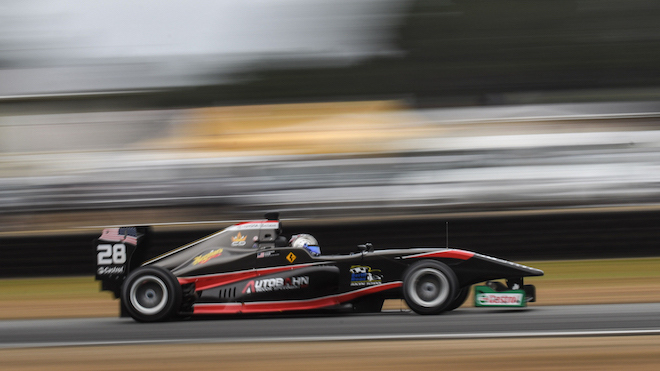 Das, now 17, continued his journey by racing in the Bertil Roos Open Wheel Series where he earned a pole at New Jersey Motorsports Park’s Thunderbolt course. The next year, Das absolutely dominated the inaugural F4 U.S. National Championship, winning nine of 15 races, including the last eight in a row, against some of the best young North American drivers, as well as drivers from Argentina, China and Denmark.

With a dream of becoming a Formula 1 World Champion, Das made the move to Carlin Motorsports to race in the BRDC British Formula 3 last year. Racing for the same team which boasts four-time F1 champion Sebsatian Vettel and IndyCar star Will Power as alumni, Das won one race and four pole positions. His quick success hasn’t come as a surprise to Macchio, who saw his skills firsthand in the Bertil Roos Open Wheel Series.

“Many things can short circuit the development of a driver – confidence issues, outside distractions, normal adolescent growing pains,” Macchio said. “As the journey continued into our open wheel series, all of these potential roadblocks were quickly and easily negotiated. By early summer it was apparent that we were dealing with someone uniquely talented, and with the temperament and intelligence to succeed at this sport on a very high level.”

Macchio has been equally impressed with the guidance of those around him. While there are few sponsorship opportunities in the United States are few without a defined economic system to support aspiring drivers. But, Macchio said Das has an ace in the hole with his family behind him.

“Cam is blessed with a great support system, including a father that has been extremely intelligent in how he has guided his son’s career,” Macchio said. “Honestly, there were times when it appeared that they were moving too fast, and I expressed concern. But, they had a well-developed, long-term plan, and a very high level of commitment that proved to be right. It is what ultimately led them to Carlin Racing, one of many very sharp decisions that have followed their tenure with Roos Racing.

Macchio sees a tremendous upside for Das, and doesn’t discount out his dream of being the first American since Alexander Rossi in 2015 to race at the Formula 1 level, or the first to race a full season of F1 since Scott Speed in 2006.

“These are among the reasons that I believe there is a tremendous upside for Cam Das – right team, excellent training, great support system, and a passionate and very hungry driver, encased in a personality that is and will continue to be a very sellable brand,” Macchio said. “I am proud that I helped launch his career, and look forward to both his continued development and ultimate success as a driver at the highest level.”

To learn more about Bertil Roos Racing School and the Macchio Driver Coaching which Das and others have received, visit racenow.com or call 1-800 RACE NOW.