Just 10 days before the start of the new Indy Lights Presented by Cooper Tires season, Uruguay’s Santiago “Santi” Urrutia (Belardi Auto Racing) laid down an early marker by posting the fastest time of the day as the traditional Mazda Road to Indy Spring Training pre-season test concluded this afternoon on the 2.21-mile Homestead-Miami Speedway road course.

Urrutia, who has finished second in the Indy Lights championship in each of the past two years, took full advantage of Mazda Road to Indy Competition Director Tony Cotman’s decision to allow three usages of the Mazda engine’s push-to-pass feature, which permits an additional 50 horsepower, within the final hour of testing to leapfrog his way to the top of the charts. Urrutia applied all three P2Ps on the same final lap on a fresh set of Cooper tires to set a best time of 1m14.5024s, an average speed of 106.789 mph. It was enough to jump him from seventh to the top with a handy margin of 0.4418s over Andretti Autosport’s “Flyin’ Ryan” Norman, who had set the pace during one day of oval testing on Friday.

“Everyone used the push-to-pass at the end, including me, so I think Aaron was quickest today. We’ve been working on setup for St. Pete and we’re pretty good, though we need to fix some problems that showed up today. I wasn’t completely comfortable in the car today because of that so we’ll get those things fixed before St. Pete. It’s going to be tough this year, because anyone can win the championship. You see from the times today that it’s going to be really tight. To win the championship you have to always be right there – win when you have the car to win, and if you don’t, be right there in the top-five.” 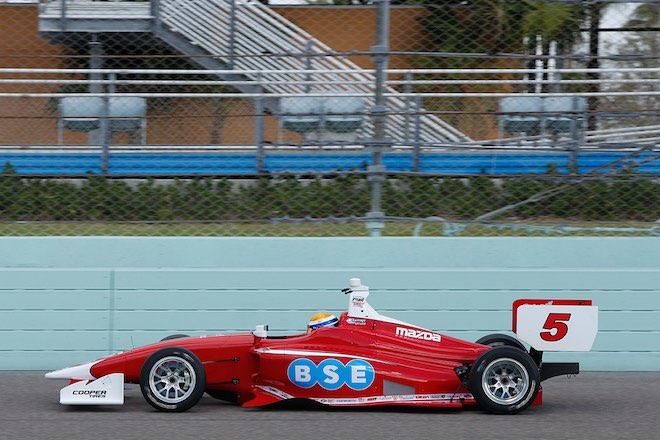 Norman, 19, from Aurora, Ohio, posted a lap of 28.5622 seconds, 187.170 mph, on the 1.485-mile oval aboard Andretti Autosport’s No.48 Journey Mazda Dallara IL-15 to edge out Andretti-Steinbrenner Racing teammate Colton Herta. Herta had been quickest in the morning session with a lap time of 28.6173 (186.660 mph), which remained good enough for second fastest overall on the day.

After the teams had spent the weekend converting their cars from oval to road course trim, Aaron Telitz, winner of the 2016 Pro Mazda Championship Presented by Cooper Tires – and both the first and last races during an impressive 2017 rookie season in Indy Lights – continued his strong momentum with Belardi Auto Racing. Telitz, from Birchwood, Wis., topped the road course times this morning and then again this afternoon on 1m15.0453s before packing up early having completed his scheduled test program.

Norman capped his promising two days of testing by moving to the top shortly thereafter on 1m14.9442s, and remained there until Urrutia’s final hurrah.

O’Ward nipped Telitz’s best by just 0.0376s to move into third, narrowly ahead of Brazilian Victor Franzoni, who has stepped up to Indy Lights after winning last year’s Pro Mazda championship with Juncos Racing. Kellett and Herta rounded out the times today, with Herta’s time of 1:15.2947 only marginally slower than the best time he posted in the corresponding test one year ago, 1m15.2009s (105.797 mph), which had been good enough for the coveted P1 slot.

The teams will now undertake final preparations over the next few days before reconvening a couple of hundred miles to the north in downtown St. Petersburg, Fla., for the season-opening Mazda Grand Prix of St. Petersburg Presented by Cooper Tires on March 9-11. At stake over the course of the 17-race season is a scholarship prize valued at $1 million to guarantee at least three races in the Verizon IndyCar Series, including the Indianapolis 500, in 2019.