Victor Franzoni, Oliver Askew, Keith Donegan and Selin Rollan have selected the teams to which they will take their Mazda Road To Indy and Mazda Road to 24 Scholarships for the 2018 racing season. 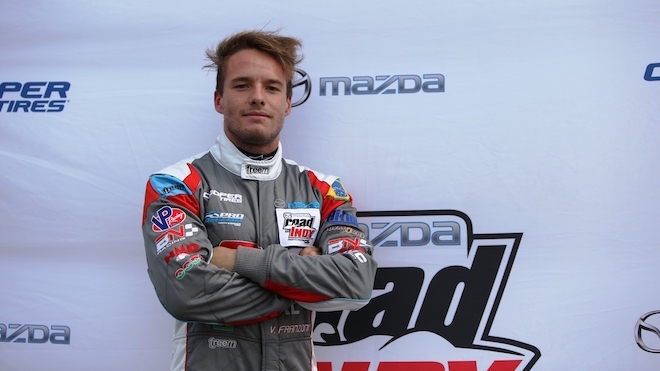 Juncos Racing enjoyed an overwhelmingly successful 2017 racing season on multiple rungs of the Mazda Road to Indy ladder. In addition to capturing the Pro Mazda Championship with Franzoni, the team won the Indy Lights championship with Kyle Kaiser and fielded two cars in the 101st Indianapolis 500, finishing 15th and 18th.

“We made a deal that if we won Pro Mazda, we would stay together for Indy Lights,” said Franzoni. “It is the best choice for me. Juncos Racing is more like a family and not like a team, so we had to stay together again this year. They just won the Indy Lights championship, we know each other very well, and we are all really good friends. It was the best choice I made to move to the United States and start in the Mazda Road to Indy ladder. I have done USF2000, Pro Mazda and now Indy Lights which was very important to me that I didn’t jump any series. I think the Mazda Road to Indy has made me ready for IndyCar or any series in the world.”

“When Victor claimed the 2017 Pro Mazda Championship, he firmly stated that the Mazda Road to Indy is not just about the financial support Mazda provide but it is about ‘hope’ for young drivers,” said John Doonan, Director, Mazda Motorsports. “No better words could describe the purpose of the Mazda Road to Indy and Victor is and will continue to be a prime example of why our brand has invested in this program for over ten years. We wish Victor much success in 2018 as he climbs one step closer to IndyCar via our Mazda program and we are grateful for the continued support of Andersen Promotions, Cooper Tires, and IndyCar as we collectively make driver dreams a reality.” 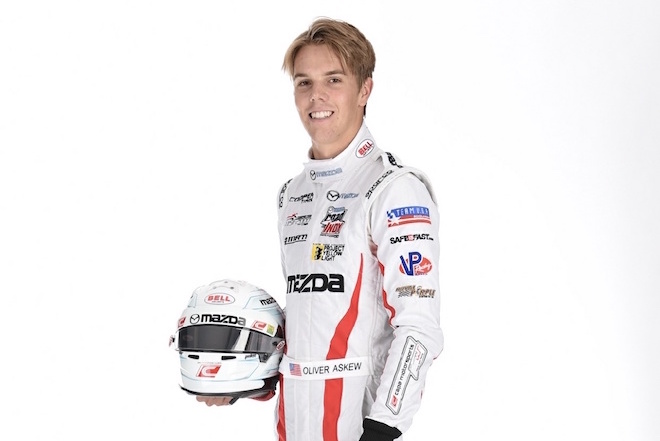 Based in St. Petersburg, Fla. Cape Motorsports has established themselves as one of the premier open-wheel ladder teams in North America. Run by brothers Dominic and Nicholas Cape, the team has an impressive history in the Cooper Tires USF2000 Powered by Mazda with 11 Drivers Championships – including seven in a row with Askew’s 2017 title – and nine Team Championships.

“It was a no-brainer to stay with Cape Motorsports,” said Askew. “It was important for me to build on the relationship with them, especially after the success that we had last year. It was the right place at the right time for me being a rookie in the field with the new USF2000 car creating a somewhat level playing field. And in Pro Mazda this year, it’s a similar situation. Where my career has gone in the past couple of years is a complete turnaround of what might have happened without Mazda Road to Indy. I don’t know if I would have been able to keep racing or make the step from karts to cars, so Mazda made that possible for me and many drivers beforehand.”

“All of us at Mazda are pleased to have Oliver back in a Soul Red race car for 2018,” said John Doonan, Director, Mazda Motorsports. “What he and his Cape Motorsports teammates accomplished in 2017 was truly remarkable, and they are certainly going to be a force to be reckoned with again this season. Oliver showed immediate speed, competitiveness, and race craft from the outset of his rookie season and we are pleased to have him again representing Mazda as part of the Mazda Road to Indy Class of 2018.” 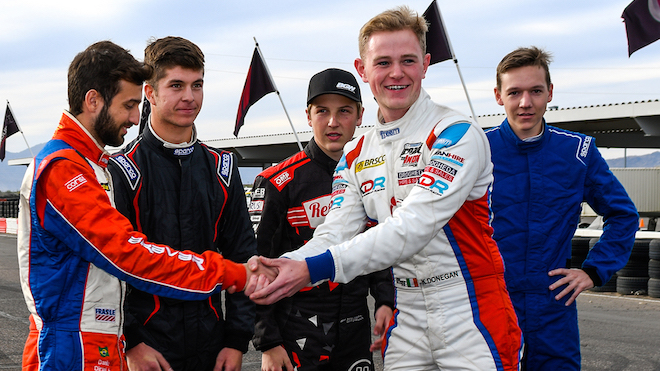 Located near Road America in Sheboygan Falls, Wis. Arms Up Motorsports has fielded race-winning drivers in the Cooper Tires USF2000 Powered by Mazda since first entering the championship in 2010. ArmsUp Motorsports also has numerous SCCA National Championships in Formula Continental to its credit.

“I’m super excited for the 2018 season,” said Donegan. “Obviously I have much to learn such as the cars, the tracks, the team and even the country. But I can’t wait for the challenge that lies ahead and I think we can do a really good job this year. ArmsUp Motorsport has a lot of experience in USF2000 and I believe that together we should be able to win races and hopefully the championship. Before the Shootout, I had never envisioned a way I could make a career out of racing. I’ve been dreaming of that ever since I was a kid, but the Mazda Road to Indy Scholarship has made that dream attainable and has relit the fire inside of me – I’m going to grab this opportunity with both hands and give it everything I can.”

“The $200,000 Mazda Road to Indy Shootout has been recognized world-wide as the key entry point to a clear path to the top rungs of IndyCar racing,” said John Doonan, Director, Mazda Motorsports. “For the second year in a row, well over a dozen drivers from all around the globe came to be part of the final on-track selection process. We are so grateful to be able to provide this program to the industry and all the young talent and families looking to grow their careers. We are thrilled to welcome Keith into the Mazda family with the well-established ArmsUp squad and wish him a very successful rookie season in the USF2000 Championship. We hope we can keep him here in the Mazda Road to Indy program for years to come.”

Selin Rollan
Rollan, 23, from Orlando, Florida used a runner-up finish at the 2017 SCCA Runoffs in Spec Miata to earn a spot in the Mazda Road to 24 Shootout, which he went on to win. A recent graduate from the University of Central Florida has put the scholarship to good use, purchasing a new Global MX-5 Cup car and selecting Sick Sideways to campaign the car for him.

Based in Sebring, Fla. Sick Sideways is a two-time champion in the Global MX-5 Cup championship. They are also just down the road from Classic Mazda in Orlando, Fla. where Rollan works in the sales department, relying on his deep knowledge of Mazdas to pair customers with the Mazda of their dreams.

“To win the Mazda Road to 24 Shootout and be able to race in the Global MX-5 Cup is a dream come true,” said Rollan. “I’m fortunate that thanks to Mazda I am able to partner with a winning team like Sick Sideways. I’ve known the guys at the team for a long time since we are from the same area, and I know they can put a championship-winning program together. It’s really fun that I’ll be traveling home from racing a Mazda on the weekends so I can get back to my day job of selling Mazdas by Monday mornings! I’m really looking forward to getting behind the wheel of our new MX-5 Cup car at the Spring Training and then the first round at Birmingham.”

“When we established the Mazda driver development and scholarship program back in 2007, it was always our goal to see young talent grow their careers from our well-established grassroots programs to the top levels of the sport,” said John Doonan, Director, Mazda Motorsports. “An added bonus is when we can then tell a direct marketing and communications story that ties to our day-to-day product. Selin Rollan checks all of those items top-to-bottom. We are so excited to see Selin make the step from our grassroots racing family to Global MX-5 Cup. And then when he leaves the race track his work as a Sales Consultant at Classic Mazda closes the full circle of what we are trying to accomplish through our motorsports strategy overall. We wish Selin the very best in his rookie season and much success off-track with our current and future Mazda owners and fans.”

Mazda Motorsports
Mazda Motorsports boasts the most comprehensive auto racing development ladder system of any auto manufacturer in the world. The Mazda Road to 24 (#MRT24) program offers a number of scholarships to advance drivers up the sports car racing ladder, beginning with the Global MX-5 Cup series and culminating with the Mazda Prototype team. The Mazda Road to Indy (#MRTI) is a similar program that includes Mazda-powered categories of USF2000, Pro Mazda and Indy Lights. In grassroots road racing, more Mazdas race on any given weekend in North America than any other manufacturer. Mazda is also the title sponsor of the renowned Mazda Raceway Laguna Seca in Monterey, Calif. Follow all of the latest news at MazdaMotorsports.com, @MazdaRacing on Twitter, and MazdaMotorsports on Instagram and Facebook.