Jason Ratcliff found himself doing some reading this past offseason. Just not the kind he necessarily enjoys.

“The rules over here, the rule book is a little different and I had to go back and refresh my memory,” Ratcliff told RACER.

That’s because for the first time since 2011, Ratcliff is once again a crew chief in the NASCAR Xfinity Series. Now guiding Joe Gibbs Racing rookie Christopher Bell and the No.20 team, Ratcliff spent the last six years at the Monster Energy NASCAR Cup Series level with Matt Kenseth.

Moving back to a series where his drivers had 352 starts and 36 career wins, Ratcliff says in general not much has changed. There is the new optical scanning system for inspection and the schedule has seen some tweaks. But mostly, Ratcliff sees the shift in competition.

“I don’t remember as many Cup-affiliated teams that run week to week as there used to be, and there’s a lot of young talent right now in the series,” he said. “There really wasn’t a lot of competition for rookie of the year and now you have a handful of guys going for it.

“And the way that NASCAR has made some rule changes over the last few years as far as Cup drivers not being able to compete for championships and only being able to run limitedly, I like that. The rest of the changes are those we experienced on the Cup side.”

Ratcliff had a good gig going in Cup. But Erik Jones was tabbed to take over the car after it became known Matt Kenseth wouldn’t be returning. Ratcliff admits he did look around outside of JGR to see what was available. In the end, Ratcliff decided the people he was working with and for, and the roots he’d laid for over 13 years at JGR, were too strong to pull up.

“Even though there were some great offers out there for me, it just wasn’t enough to outdo what I had,” Ratcliff said. “Regardless of what position I had at Gibbs, it’s just a great place to work. And this [deal] kind of came together late in the year. It was, we have a lot of talented drivers, talented crew chiefs and we don’t have enough cars to put them where we’d like, so how do we do our best job of putting guys where we need them and pairing the right people? In the end, it worked out really good.

“Yeah, there were some things at the end of last year that were, I don’t want to say disappointing, but you hate to see a guy like Matt Kenseth leave the sport because he’s super talented. I would say he’s in the top 10 percent of drivers on the Cup side. But the sport is changing. It’s changing fast.”

Jeff Gordon. Tony Stewart. Dale Earnhardt Jr. Kenseth. All superstar drivers who have exited. Thankfully, though, there is a lot of young talent coming in, including the driver Ratcliff is working with, the reigning champion of the Truck Series. 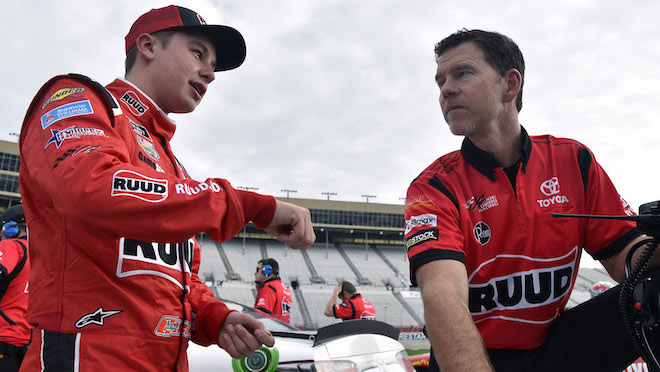 Whereas Ratcliff is even-keeled, Bell has a contagious attitude that lifts those around him. Bell is pumped up – about everything, says Ratcliff. Practice. Qualifying. It doesn’t matter.

And while the team is already quickly learning what Bell needs, the chemistry between the driver and crew chief has taken little time to develop – even if there is an age difference that Ratcliff can only humorously describe by widely opening his arms.

“I don’t want to say it’s awkward, but there’s a big gap there,” said Ratcliff. “I have a son that’s Christopher’s age. But from an experience standpoint being in this sport for a long time and working with a lot of young, up-and-coming drivers over the last 12, 15 years, it’s fun. It’s refreshing to see that again, the things that excite these drivers.”

Saturday morning at Atlanta Motor Speedway, Bell and company found excitement in scoring their first pole together. It is the second pole for Bell in nine career starts, and within the garage, Bell and the No.20 team are considered one the favorites for the championship.

Expectations within the team for this year? Ratcliff says those never needed to be spoken.

“I think before we ever sat down, we had the same goals. I knew just from watching Christopher in other series, TV interviews, and the few races he ran last year, I knew what his expectations were real quick,” said Ratcliff. “I think him knowing my experience and how fortunate I’ve been over the last 15 years, he pretty much knew what my expectations were, too.

“There were some things we as far as, how do we want to approach the season early on? What are some things we need to be realistic in our expectations? For us, hey, let’s go out there and try to establish good communication and then work through the races and learn each other. … We have the capability of winning some races and, hopefully, getting to Homestead and being in contention for [the title].

“But it’s not going to be easy. We have the team and we have the talent and the resources, but you still have to work hard and put it all together.”