Kurt Busch: Luck not on our side at Daytona

Kurt Busch: Luck not on our side at Daytona

On February 26, 2017, Kurt Busch led the last lap to win the Daytona 500. One year and 198 laps later he nearly did the exact same thing with an attempted pass on race leader Denny Hamlin – but contact with Ryan Blaney set off a multi-car wreck that ended his hopes of a rare repeat win.

The 2004 series champion spoke to RACER about the disappointment of missing out on a second Daytona 500 victory and what lies ahead for his 613rd career start Sunday at Atlanta.

Q: What did you make of your 2018 Ford Fusion on the 31-degree banks of Daytona last Sunday?

KURT BUSCH: Man, we were close to going back-to-back at Daytona. It was such a special feeling. The energy and the vibe and just all of the feedback of from family, friends, fans, everybody was so stoked to see the 41 have a shot at it.

That was special to me to go there and defend that title and try to bring it home it again. The car was strong. The car was there. It was just one of those quick moments where the race hits your fingers and then it slips through.

Q: Did you know your car was as strong as it was right from the onset of the race?

KB: Yeah, I knew right away that our car had speed in it and I wanted to go out there and set a tone early in the race by winning that first stage. And it was a perfect plan, perfect execution and we were able to pull it off and at that point I wanted to make sure to try and stay away from some of the trouble that I knew was going to happen because Daytona gets crazier every year and it’s more about survival. I just went into protection mode for the second half of the race and poured it on right there at the end.

Q: Did it bum you out when you missed your pit stall just before Stage 2?

KB: (Laughter) Like I said, the plan was to win the first stage. We played it and we worked it and we won it and I was like, “Wow, this is the script that came from last year and how we won the race. Now it’s all unfolding and everything is going to plan.” Then I lost focus! I was actually celebrating that Stage win because that was our first one ever on the 41 car and just had a brain fade and missed the box.

Q: Nearing the halfway mark were you aware of who had dropped out of the race as well as who was really fast and was going to threaten for the win?

KB: You had to count on everybody being fast and then as the race went through its sequences, you could see that a couple of top dogs got knocked out. Once my teammate [Kevin] Harvick got some damage, [Clint] Bowyer lost a cylinder, I knew that me and [Aric] Almirola were going to be the two left in the Ford camp for Stewart-Haas. I knew he was going to be my guy later in the race.

I also knew Chase Elliott was going to be strong, but he ended up with some bad luck. And Blaney, he just seemed to have the car, the attitude and the edge all week and when he won his qualifier I was like, “Alright, that’s confirmed. He’s going to be a tough guy to beat on Sunday.” So I was watching Blaney out of the left side of my eye all race long.

Q: Were you in-step with your new crew chief Billy Scott the entire way?

KB: I was really, really happy with the way our communication went on our first weekend. There was fun together, there was looseness, but there was also seriousness, and they’re teaching me quite a few new things on the data information gathering and the spreadsheets, so there is a whole different feel coming from the team this year. It’s more just about the information and the data that we’re able to look at over the laptop instead of just going old school.

Q: How did it all look to you as it all wound down to the end?

KB: You know, I was feeling it, man. I wanted to be in the lead in case the yellow came out behind me, that way I had lane choice on the restart. So I kept pushing to stay up front and we were leading, five to go, four to go. I left the outside open because I had Almirola behind me pushing. When Denny got back by me, I just felt this urge, like, “Man, I need to be the leader in case the yellow comes out.”

It was just the wrong move to make. I shouldn’t have went to the high side. I should have stayed low. I ended up getting into a position where Blaney was aggressive and pushing – which I knew he would be – and we got turned around. We just didn’t quite have the luck on our side this time. 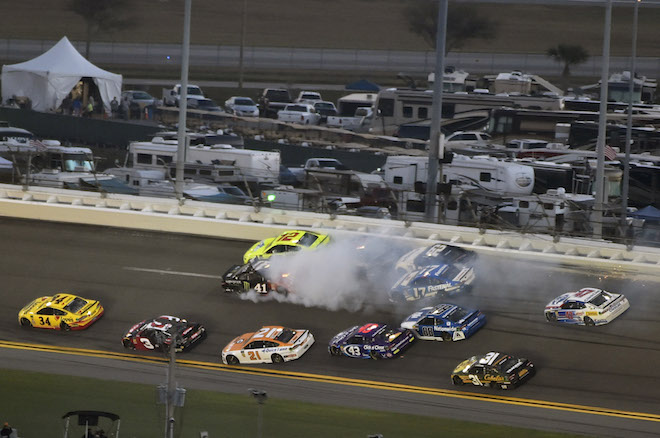 Q: From what he had to say afterward on TV as well as in the media, Blaney appeared to have a lot of dignity about just went wrong between the two of you. It seemed like he was sort of bummed that he spun you. What’s your take on that?

KB: Yeah, I genuinely felt that way, too. The two of us talked about it today at our Ford meeting. We all say it’s one of those racing deals, but this one was amplified because we were all racing for the Daytona 500 win. There’s no right or wrong reason to it all, it was just good, hard racing and I patted the kid on the back.

Q: It must have really been something inside of the cars during that twilight stage of the race. When you guys climbed out of your cars, everyone seemed a bit dazed and wide-eyed.

Q: How many times did you run the finish of the race through your mind on Sunday night?

KB: The images definitely played back in my mind time and time again on what I could have done right, wrong or different. You replay it on how you wanted it to go and those are the things you just have to stack away for memories and knowledge to be able to execute better the next time around. It was 24 hours of trying to figure it and then you have to move on to Atlanta.

Q: Atlanta Motor Speedway looms ahead. Do you like the place?
KB: I do. I’ve won there three times. I love the old, worn-out surface and how you have to play the tire management game. It’s going to come down to a restart at the end because, literally, you do five laps at that track and the track chews up the tires so quick that you know it’s going to come down to a pit stop at the end and a short restart run to the checkered.