Daniel Ricciardo has given the Red Bull RB14 its first laps during a promotional event at Silverstone on Monday.

Red Bull launched its 2018 car on Monday morning, with the RB14 the first new car to be seen in the flesh as opposed to the renderings released by Haas and Williams last week. Images of the car in the Red Bull race bays were followed by track action shots as Ricciardo gave the car a shakedown at a wet Silverstone circuit.

On full wet Pirelli tires produced specifically for promotional events, Ricciardo was limited to a maximum of 100km during the filming day. The event was the first promoting Aston Martin as the team’s title sponsor, with Ricciardo arriving in a DB11 sporting the same blue and black livery as the RB14 – a one-off color scheme before the race livery is unveiled in Barcelona next week. 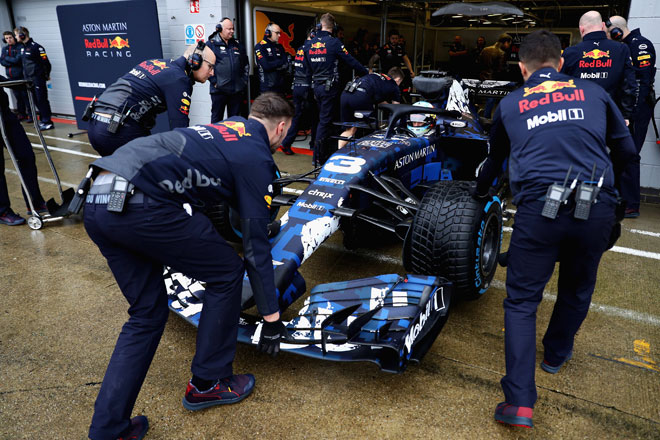 “It’s preferable to finish the car early and deal with any snags now, when the car is on a track a short drive from the factory, rather than using up one of our eight ultra-precious test days doing the same at the Circuit de Catalunya,” Red Bull announced when launching the car, before adding that the filming day is a “very valuable exercise” for the team.

Speaking about his personal goals before the new car was launched, Ricciardo says his main focus this season is on maximizing his preparation regardless of how competitive the RB14 proves to be.

“I’ve got goals that I want to achieve but I don’t necessarily say, ‘By race three, I want to be on the podium already twice and have pole position,'” Ricciardo said. “I don’t set goals like that. I guess the thing for is that I want to be true to myself. Make sure I’ve prepared as well as I can before the race, and then I know I’ll get the most out of it.”