BK aims to race on despite bankruptcy filing

BK aims to race on despite bankruptcy filing

Bankruptcy will allow team owner Ron Devine to form a plan where he can repay the necessary debts. The course of action came before court proceedings were to be held in North Carolina after Union Bank & Trust, which claims BK Racing owes it more than $8 million, had requested a receiver oversee BK Racing collateral, which includes a charter.

According to the bankruptcy filings, BK Racing is said to have more than $10 million in assets and liabilities. There are 20 creditors with unsecured claims against BK Racing, which comes out to approximately $1.2 million.

Gray Gaulding will drive the No.23 car this weekend at Daytona. He did not get make a qualifying lap last Sunday because REP refused to start the motor. Gaulding must compete in his Thursday night Can-Am Duel race if he’s going to start the Daytona 500.

“We have a clear process around charter member governance,” read a NASCAR statement. “It is incumbent upon charter members to be ready to race and compete at the highest level. BK Racing remains the holder of the Charter.” 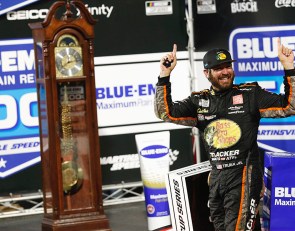