The 2016 Daytona winner paced the field for 41 laps in his No. 2 Team Penske Ford for his first Clash victory, as several cars in the 17-car field wrecked behind him.

“A great way to start the season. It’s the first time I’ve won anything in Speedweeks,” said Keselowski. “It feels like I’ve choked all of them away.” 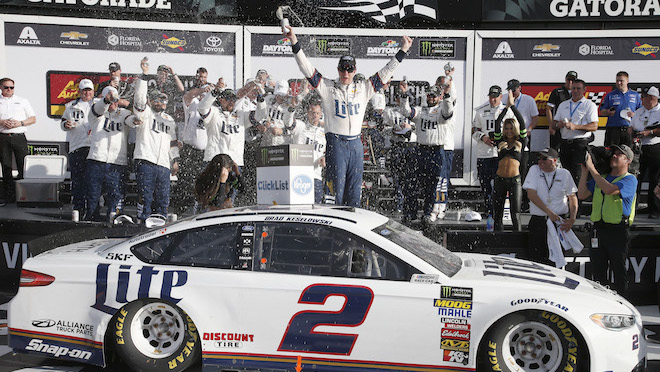 During the final lap, Kyle Larson’s No. 42 Chevrolet gave Jimmie Johnson a hard bump, causing Johnson’s No. 48 Hendrick Motorsports Chevrolet to spin out and triggering a multi-car incident. Johnson was running toward the front after rallying from a pit road penalty earlier in the race. This is the seventh straight year that Johnson, who was scored 12th, has wrecked out of the Clash.

Joey Logano finished second in his No. 22 Ford, giving Team Penske a 1-2 finish. Defending Daytona 500 winner Kurt Busch came up third in his No. 41 Stewart-Haas Racing Ford, while Team Penske’s Ryan Blaney finished fourth in his No. 12 Ford. Polesitter Austin Dillon completed the top five in his No. 3 Richard Childress Racing Chevrolet.

“We made a move there at the end from pretty far back and got up through there quite a way. I was trying to get somebody to go with me, but I think everybody was scared of the Penske train up there that was running,” said Dillon. “Those top three were pretty hard to get out of the way. We will just have to figure out ways to work together with some of the other Camaros.”

Jamie McMurray brought out the second caution of the day, his No. 1 Chevrolet spinning after contact from Kurt Busch at Lap 34. The Chip Ganassi Racing driver came down for repairs twice, but ultimately headed to the garage early and was scored 17th.

Ricky Stenhouse Jr. was penalized for dipping below the yellow line – illegal at Daytona and Talladega – around Lap 45 and had to serve a pass-through penalty.

The 75-lap race saw seven different leaders throughout the afternoon.