By way of a blind draw at the Speedweeks Premiere at Daytona fan festival, Austin Dillon will start from the pole for Sunday’s Advance Auto Parts Clash.

Dillon will be joined on the front row by Denny Hamlin. Row two features Joey Logano and Erik Jones.

Danica Patrick, winner of the 2013 Daytona 500 pole, is not participating. Earlier Saturday, she said she regretted that her ride with Premium Motorsports came together too late for the Clash to be a possibility.

“Thinking about what we should have done came together too late,” she admitted. “A couple of days ago I was thinking to myself that we should have run the back-up car in the Clash. That way… we don’t want to crash the primary anyway, so we are going to be careful in the duels, then you don’t have to worry about practicing too hard because you will have already had Clash race. I was like, man, where was I on that one? And then all goes well, last year I finished well in the Clash, you could still have a back-up.

“So, it would have just been a good gamble to use the back-up for, but didn’t think of it soon enough and was honestly just really concerned about the work getting done to put the primary car out there for the [Daytona] 500.” 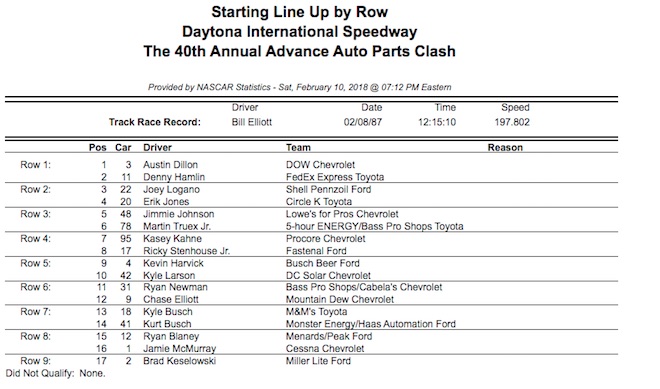