Day or night, hot or cooler, Takuma Sato continued to show everyone the quick way around Phoenix on Saturday afternoon.

After posting the fastest lap in Friday’s opening session and then backing it up with the second-fastest speed behind teammate Graham Rahal on Friday night, Sato set quick time in Saturday’s 80-degree temperatures.

The first 12 cars were separated by less than three-tenths of a second as 22 drivers completed the three-hour session with no incidents.

For most of the day it had been a Honda parade before Team Penske flexed its muscles late. Defending IndyCar champ Josef Newgarden sat out the first 90 minutes before putting up a lap of 19.621s in the final 45 minutes, which wound up eighth overall. And Pagenaud posted his good lap in the closing minutes.

Ed Jones put the other Ganassi entry into the top 10 with a circuit of 19.601s, while rookie Matheus Leist continued to impress for A.J. Foyt’s team – turning in the ninth-best lap of 19.629s in his ABC Chevy.

Alexander Rossi wound up 10th and Rahal was 11th, both of their times coming early in the session. 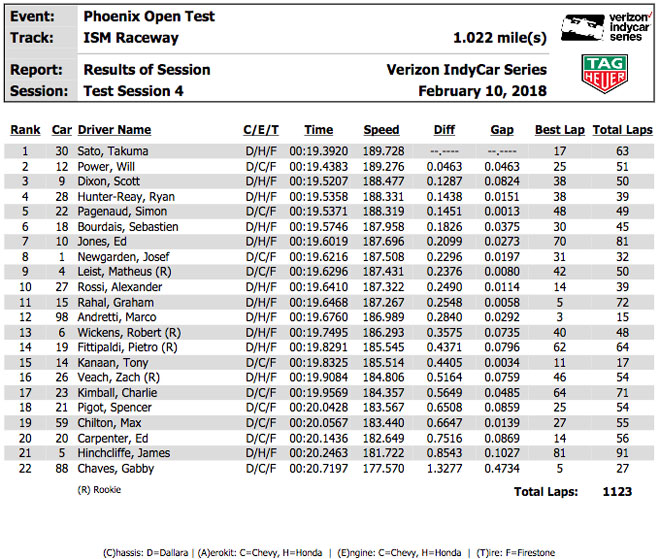