Justin Haley and crew chief Kevin Bellicourt have a few goals set for this year, and one is aimed at their competition: Be the Camping World Truck Series team everyone hates to see.

The 18-year-old sophomore GMS Racing driver is so confident going into 2018 that this was among one of the first things he offered when speaking to RACER.

Bellicourt doesn’t hesitate to back up Haley’s proclamation.

“I’m with him 110 percent,” he says. “I think even after these first three races we’re going to make enough of a statement that people are not going to want us to show up; I feel that confident [and] I have that much confidence in my driver and team and the organization we’re at, all the tools we’ve got at our disposal.

“We’re ready to be that team, and we want to be that team. There’s nothing easy about it. I have an enormous amount of respect for everyone at Kyle Busch Motorsports and all the other places – ThorSport. Those guys bring amazing stuff to the race track, and it’s not going to be easy, we’re going to have to work so hard to be able to achieve those goals.

“The benchmark is set high. We’ve got to go beat the No.4 [KBM] truck. Those guys have set the bar high, but we’re going to work hard, and we’re going to try to be better than we’ve ever been and to get to that point. That’s our goal.”

The team’s confidence is not entirely unexpected. Despite missing the first two races last year while he waited to turn 18, Haley and his group were optimistic about making the playoffs up until being officially eliminated at Chicago. When all was said and done, Haley took home 12th in the point standings with 12 top-10 finishes, three top-five finishes, and one pole.

The speed Haley had at the end of 2017 is what has Bellicourt looking forward to this year. Yes, the team reeled off eight top-10 finishes in its first ten races, but as the season wound down, Haley was running closer to the front and challenging for wins. 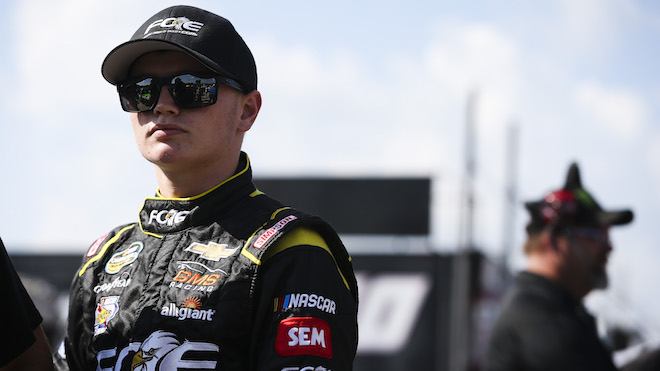 In the last three weeks of the season, Haley was beginning to knock on the door of the winner’s circle. He won his first pole at Texas and led 25 laps, was sitting third at Phoenix before getting caught up in a wreck, and was fast at Homestead but never had the track position or cautions fall his way.

“We ran good all year, but I felt like we were starting to cross over that point where we could go up there and race for wins week in and week out, and at every kind of track,” says Bellicourt. “That was pretty exciting to me.”

“We both learned together,” elaborates Haley of his rookie season and Bellicourt’s second year as a crew chief. “Every week we always had something to improve on, we kept building week in and week out and I think it started to show toward the end of the year. We really started picking up speed. Lucked into a few finishes [at first], and there at the end, we were contending for them. So, I’d much rather perform like that than luck into anything.”

“Best friends” is how Haley and Bellicourt describe each other. Such a close-knit relationship extends all throughout the Fraternal Order of Eagles team. In one year they’ve not only built a platform for success, but formed a family-like bond. A bond built on trust, says Haley.

“They’re trust me with their career, and I’m trust them with my career,” he says.
The vibe within GMS also feeds the confidence. One of Haley’s teammates is Johnny Sauter, the 2016 champion and seven-time winner in the last two seasons. Granted, Sauter and Haley have had their ups and downs – just go back and watch their tangle in Texas – but Haley speaks highly of the veteran because Sauter isn’t afraid to speak up and tell Haley when he’s doing something wrong, while also making sure to pump the youngster up, too.

“It’s just back and forth,” Haley says.

Stocked full of confidence, all that’s left – and all that matters – comes on the race track. Haley speaks boldly about how he wants the competition to see him, but he is modest and more reserved about his goals and expectations. A driver would love to get ahead of himself by saying they are going to win every practice, the pole and lead all the laps, but Haley says you can’t get ahead of yourself. 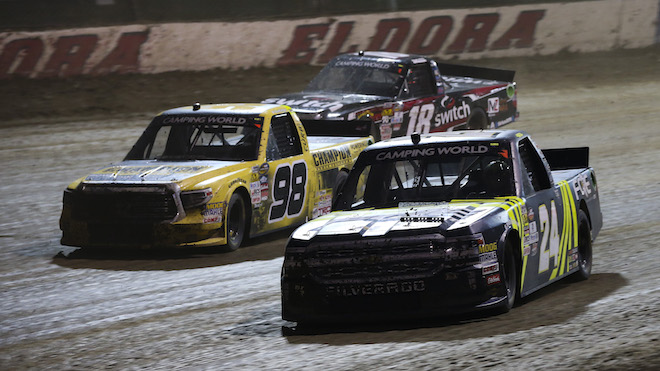 “GMS is very good at superspeedways (Daytona and Talladega),” Haley says. “I’ve got really good intentions going into Daytona, and that’s always good because the whole offseason I’ve been looking forward to going back to Daytona because of just how fast GMS is there. I feel like we can make the final four at the end of the year, and obviously, it’s up to me at that point. There’s absolutely no reason me and Kevin should not be in the final four.”

One race, one achievement at a time. Win a race, then the next. Then the playoffs and the championship. There are no tracks Haley is worried about. Aside from the superspeedways and a fast 1.5-mile package, Haley is chomping at the bit to get to the road course in Canada, the first race of the playoffs. With a background in road racing, Canada is right up his alley.

Again, Bellicourt is on the same page as his driver.

“We are fully capable of going to contend for a championship,” he says. “I don’t like to put a lot of pressure on my team; I don’t like to put pressure on myself or my driver, but I can tell you from where it sit, we didn’t achieve our goals if we’re not in the final four at Homestead. And I know that’s a lofty statement, and there’s a bunch of factors that can come into that. But we don’t make it, I’m not going to be mad – I’ll be disappointed, because I want to win a championship, [and] we have everything we need at GMS Racing.

“Justin is fully capable, I’m capable, my race team is capable. We can go beat everybody in the Truck Series this year, and I believe that 110 percent. So yes, if we don’t make it to the final four I will be disappointed for sure, because I know it’s there.”

The first stop on Haley and Bellicourt’s ‘make you hate us’ tour is Daytona: a place where Haley has no prior experience, but can’t wait to see on Feb. 16.

“I think a lot of drivers and people have enjoyed night races,” says Haley. “From the driver’s standing, night races – the mood and the vibe – they’re just a lot better. Daytona being a night race, I think it’s going to be pretty cool. Definitely a mile marker in my career to make a start at Daytona.”