Jack Harvey is set for a six-race campaign to mark the start of a multiyear partnership between SPM and Shank, who continues a two-car Acura NSX GT3 program in the IMSA WeatherTech SportsCar Championship. The pink chrome highlights on the No.60 entry coincide with AutoNation’s #DrivePink campaign.

“We are really pumped about this opportunity in IndyCar and this was a great way to spend more time with our key contacts with SiriusXM and AutoNation and get things kicked off for the year,” Shank said. “Things are coming along with the car and we are eager to get out and get some miles in and build towards St. Pete. Seeing the car in person only fires me up more for that to happen.”

Harvey will be in the car at the season opener at St. Petersburg and Long Beach before attempting his second Indy 500 start. Then it’s on to Mid-Ohio, Portland and Sonoma.

“It’s a really special moment working with Michael Shank Racing as well as with SPM – the team that brought me over from Europe,” Harvey added. “It’s two places that I feel at home and now I have an even bigger home with both teams partnering for one effort. I also can’t thank Mark Cannon and Jim Meyer with AutoNation and SiriusXM enough because they are the reason to have a multi-year commitment and that is a tremendous vote of confidence in everything we are doing as a team. I wouldn’t be doing anything if it wasn’t for them and my appreciation level is through the roof right now.” 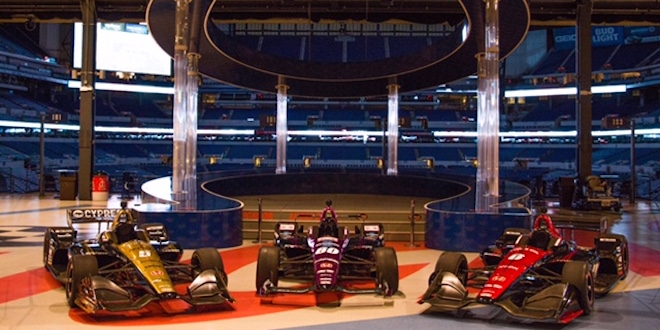 SPM’s 2018 cars will keep the chrome design which debuted on the No. 5 and No. 7 entries last season, with Arrow Electronics and Lucas Oil returning as primary sponsors. Hinchcliffe’s No.5 Arrow Electronics Honda will feature a slightly revamped gold chrome livery. Canadian rookie Robert Wickens will race the red chrome Lucas Oil Honda No. 6 machine, a change from the team’s No.7 entry and a nod to Toronto’s nickname “The 6.”