Nikita Lastochkin took a very different route to the Mazda Road to Indy Presented by Cooper Tires than many of his fellow competitors. With no motorsports background growing up in Moscow, Lastochkin did not start racing until the age of 22, after moving to the United States. Here, the now 27-year-old entering his sophomore Pro Mazda Championship Presented by Cooper Tires season, talks about coming to America at the age of 16, how he first got the racing bug and how taking racing cues from Colton Herta is a good idea.

What made you decide to move from Moscow to Los Angeles?

I grew up in the city, just doing regular stuff, nothing about racing. I hung out with my friend, getting in trouble. As soon as I graduated from high school at 16, I moved to the United States. I had no family here, no friends, but I’d always had an adventurous streak and I wanted to see the world, see what was out there. I didn’t know what I wanted to do in my life, what degree to pursue, so I asked my parents if I could do it, and I moved to English First, a language school in the Los Angeles area. I could speak English, so it was more about exploring the city and the culture. It was a nine-month program and after it was done, I got an Associates Degree from Santa Monica College, then a business degree at Cal State Northridge. When I finished with school, I worked in the jewelry industry.

I didn’t know anything about racing. You could have shown me a Skip Barber car or a Formula 1 car and I wouldn’t know which was which. But even back home in Russia, I had a passion for going fast – in a snowmobile during the winter and an ATV during the summer. But there was no karting in Russia, so I didn’t even know that world existed. There might be one or two karting tracks now but back then, if kids wanted to pursue karting, their parents had to take them to Europe.

I took the Skip Barber Racing School just for fun and I really enjoyed it – and I did pretty well. I heard about the racing series and decided to give it a go. I had some good success, with wins and poles, all that good stuff. From that moment, I decided to quit my jewelry job and focus on racing.

No one in my family had ever had anything to do with motorsports, so everything was brand new to me. I had to discover how to go about it, learning about all the options. And I’m still learning, every time I get into the car.

Take us through your racing career to date, from Skip Barber into the Cooper Tires USF2000 Championship Powered by Mazda, and now in Pro Mazda.

I had raced against Colton Herta in Skip Barber, and as I was looking at where I would go next, I saw that Colton was racing in Pacific Formula F1600. I had no idea of who he was, aside from being a race car driver. But I knew that Bryan had been a driver, so I figured that wherever Colton was going would be a good move after Skip Barber. That was my logic that first year, since I had no one to advise me. I purchased every book I could get my hands on and read everything about racing. I even tried karting, since I felt like I had missed out on that. I did a SKUSA race in a TaG Senior, which was really an eye opener.

Before the 2014 season, I called the team Colton had run with, PR1, and started in Pacific F1600. I won the series and finished sixth in the F1600 Championship Series. I also kept doing Skip Barber, finishing third in the 2014 Summer Series and second in the Winter Series. 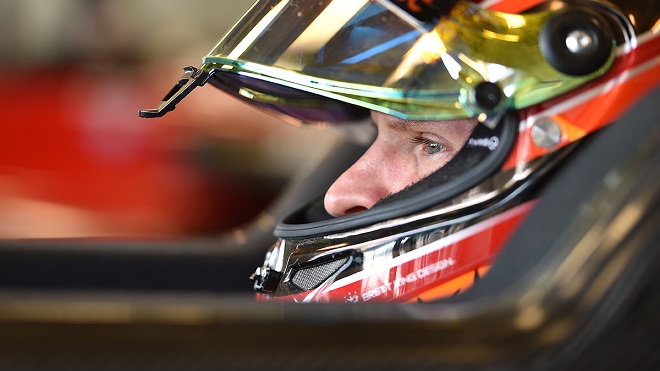 What got you interested in the Mazda Road to Indy and the Pro Mazda series?

I had met Anders Krohn, who was working with Team Pelfrey. They were such a competitive team, so I reached out to them. I was racing against Ayla Agren, Luke Gabin and Garth Rickards, who were driving for Team Pelfrey, and I figured if they were doing USF2000, I would do it as well. And if IndyCar is the top level in North America, the Mazda Road to Indy was the way to get there. The first year in USF2000, everything was brand new to me and it was all about learning as much as I could.

By the end of the year, I had gotten comfortable and had the chance to really look at Cape Motorsports. They had such a huge history and had won everything, so I went with them in 2016. I had a front row seat for the championship between Anthony Martin and Parker Thompson, and I was super happy for both of them. It was a battle on track but it never spilled out into the truck. We all got along really well.

I moved up to Pro Mazda last year with Team Pelfrey. It was such a different car to drive and a different sort of season, being the last year of the old car. So I took it as just a learning year, trying not to get too frustrated about the results. I had podiums and wins in other series but I didn’t have any for a couple of years and that was a monkey on my back until I finished on the podium in both races at Road America. And I’m definitely more comfortable in the new car!

What are your expectations for 2018?

I’m quite happy to be back with Cape Motorsports – I know them, and they know me. It’s like being back at home. It’s always my plan to do the best I can and to keep progressing. This season will be a lot of fun, with all the drivers who will be in the series this year. And the new car means everyone starts from scratch. It’s a really quick, modern car and every time I’m in the car, I have a huge smile on my face.

What kind of activities do you do away from the race car?

None of my friends are into racing, and I quite enjoy that. Racing doesn’t define me. I live a completely different life away from the track but I do still work on my fitness and do sim work.

What is your favorite racetrack?

Number one is Mazda Raceway Laguna Seca, with Road America and Watkins Glen second and third. I also like Toronto – my wife Yulia comes with me every year because we really like the city and there’s so much to do away from the track.

Probably something in business. But if I could do my degree over, I might want to get into architecture. It’s such an important job, because you create the world that people live in. And I would have a lot more money in the bank, that’s for sure!

What do you do to relax and get away from racing?

I like spending time with my wife and friends, along with reading or watching movies. And my wife and I really like to travel.