David Hobbs, whose career as a championship racecar driver has spanned three decades and his stint as a television commentator for more than four, was honored by the Road Racing Drivers Club with the 2018 Phil Hill Award. RRDC president Bobby Rahal made the presentation at the annual RRDC members’ dinner on Jan. 24 prior to the running of the Rolex 24 At Daytona, the season opener of the 2018 IMSA WeatherTech SportsCar Championship.

The Phil Hill Award has been presented annually since 1993 to the person who the RRDC feels has rendered outstanding service to road racing. The recipient may be a driver, entrant or outstanding member of a sanctioning body.

It is named in honor of America’s first Formula 1 World Champion (in 1961), and is not only a tribute to his masterful accomplishments on the race track, it also recognizes his contributions as a great ambassador for the sport. Hill passed away in 2008.

Hobbs, born in Leamington Spa, U.K., in 1939, started racing in his mother’s Morris Oxford in 1959, then extended his driving career to the U.S. FastMasters Championship in 1993.

His racing accomplishments include winning the SCCA Trans-Am championship with five victories in 1983, 11 victories in IMSA Camel GT competition, three third-place finishes at the 24 Hours of Le Mans, and 22 race wins in a seven-year Formula 5000 career. He’s second on the all-time Formula 5000 win list, winning the 1971 championship. in his Formula 1 debut in Syracuse, Sicily, in 1966, he finished third. He also set a British closed-course speed record of 167.5 mph driving the then-secret Jaguar XJ13 in 1967, a record that lasted for 19 years.

As a popular television analyst and color commentator since 1976, Hobbs has appeared on 17 consecutive Daytona 500 broadcasts on CBS, including the 1979 Daytona 500, the first live, flag-to-flag telecast of a NASCAR Winston Cup race. This race, and the large audience rating it received, became a benchmark in the television coverage of auto racing in the U.S.

Most recently, the affable broadcaster co-hosted live coverage of the Formula 1 races from 2013-2017 on NBCSports, alongside Leigh Diffey and Steve Matchett.

He’s the owner of David Hobbs Honda in Milwaukee, Wis., serving as chairman of the Wisconsin State Dealer Council from 1993-98, and was a member of the National Dealer Council for two years.

“Phil Hill represented everything that was great about the American spirit internationally,” said Rahal. “He was the first U.S. Formula 1 champion and multi-time winner of Le Mans. He was a gentleman in the finest sense of the word.

“He was very much a class guy, and he let his driving speak for him. He wasn’t a braggart. He just did his thing and he won a lot of races, including Le Mans in the ’50s and ’60s. He drove for Chaparral, and pretty much did it all.

A tribute video produced by Hobbs’ longtime rival yet true friend Sam Posey was shown. “David has a third career, which is just being himself, exuding good humor, and comfortable at being a genuine celebrity,” said Posey. “From the beginning he was seen as a cheery chap at the pub in Upper Boddington (U.K.), but over time David emerged as a man who was dead serious about his driving and thus staying alive in what was in those days, the mid-1960s, an extremely dangerous sport.

“A combination of modesty yet confidence would serve him well throughout his driving years.”

Hobbs was not in attendance as he was home ailing from the flu, but provided a video to the capacity crowd of RRDC members and their guests. “I want to thank my very old friend Sam Posey for putting together yet another wonderful piece of fiction – absolutely, as always, beautifully narrated,” said Hobbs. “Thank you very much, Sam, indeed, for those very kind comments.

“Obviously, I’m amazingly proud to have been awarded the Phil Hill Award for 2018. Since 1993 when the award first came out it’s been won by practically every North American racing driver, team owner, chief mechanic and writer. Finally, it’s my turn to win the award and, unfortunately, I just cannot be there to accept the award tonight and I am bitterly disappointed.” 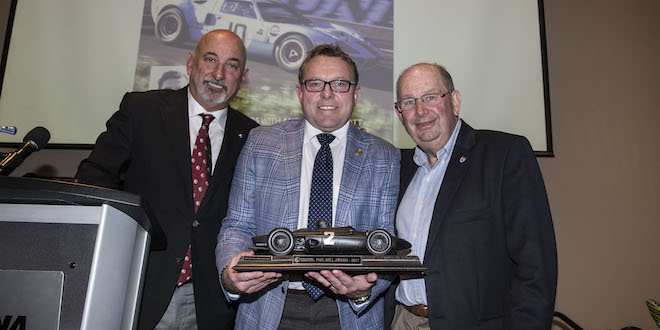 “I didn’t start the book, that’s why I call it a ‘book rescue.'” said Marriott. “It was about two-thirds done when I started it. David kept re-remembering things, and every time he’d remember something it was different from the time he remembered it before.

“It has been a labor of love, this book. It’s been an endurance writing it, it hasn’t been a sprint. It’s got the most fabulous pictures in it and some pretty good stories. I think everyone will enjoy reading it.”

Quipped Diffey, “As you saw from the video of David from his home in Vero Beach, he had a nice tan on his face, he sounded healthy. He’s completely healthy. He found out it was a cash bar and that’s why he’s not here.” Hobbs is known to happily take jabs from his longtime friends, and return them as well.

“For those of you who’ve seen him on television or those who are in the room and have been friends of his, he’s the same guy. He’s the same guy here, the same guy on TV, the same guy at home, which is what makes ‘Hobbo’ so beautiful, which I think will make the book so successful,” added Diffey. “It’s killing him not to be here tonight. He loves all of you, he loves telling stories, he loves having a glass of wine.

“He’s a serious guy. He doesn’t put himself up there with the greats. He says [it’s] because ‘my results were @#$%.’ But they weren’t. He had great results. He won his class at Le Mans twice. He’s done so much, and this sport that we all love is front and center in his heart.