While Joao Barbosa continued to lead the Rolex 24 in the No.5 Mustang Sampling Cadillac DPi-V.R, a pair of other manufacturers were breaking up the GM phalanx up front. Pipo Derani was running second, 3.528s behind Barbosa in the No.22 ESM Nissan Onroak DPi. But it was short-lived as a right rear puncture caused back-end damage as Derani carefully limped back to the pits.

While Ryan Hunter-Reay was third in the No.10 Konica Minolta Cadillac, Simon Pagenaud worked his way up to fourth in the No.6 Acura Team Penske ARX-05.

The third hour saw the first full-course caution of the event, a 16-minute yellow after James French ran out of fuel in the No.38 Performance Tech Motorsports ORECA 07-Gibson.

Dirk Mueller continued to lead in GTLM after taking over for Joey Hand in the No.66 Ford GT, followed by the Corvettes of Antonio Garcia and Tommy Milner.

Luca Stolz was in front in GTD in the No.33 Mercedes-AMG GT3.

Robert Renauer rejoined the race in the No.58 Porsche 911 GT3 R, 77 laps down in GTD as Wright Motorsports completed repairs to the damage sustained on the parade lap. 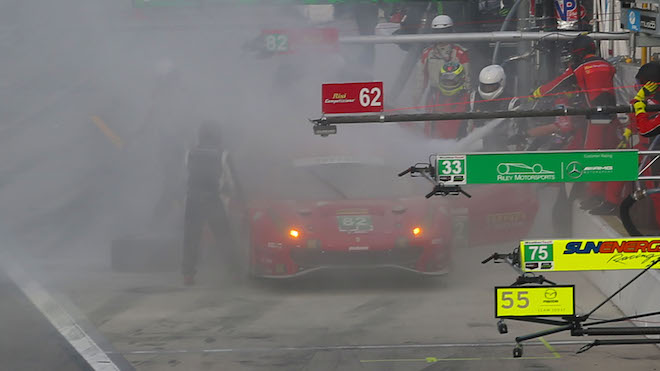 Also rejoining the event was Ricardo Perez de Lara in the No.82 Risi Competizione Ferrari 488 GT3. There was a fuel spill when the hose was disconnected on a pit stop, causing a fire under the car (above) and a visit to the garage to clean up debris from the fire extinguishers.