What are Patrick's real options for Daytona and Indy?

What are Patrick's real options for Daytona and Indy?

Danica Patrick’s most viable prospects for landing a ride for Daytona and Indy both appear to reside with small- to-medium-sized programs.

GoDaddy announced on Thursday that it will rekindle its partnership with the 35-year-old for what has been coined the “Danica Double”; the two-race farewell tour with which she plans to end her career. But she’s yet to confirm a seat for either race, and with Daytona now just a month away, locking down the NASCAR side of the equation has become the priority.

A common denominator in the deal that Patrick’s management team is shopping around is reportedly Chevrolet, and on the Cup front, that immediately limits her options when it comes to the major teams.

Chip Ganassi Racing has already said Patrick will not be in one of its cars. The car cap of four would also rule out Hendrick Motorsports, which at any rate has not expressed any interest in getting involved in the Patrick sweepstakes.

Also to be taken off the list: Richard Childress Racing. RCR does have an open car – as well as a charter with the No. 27, as Paul Menard has moved on – but a spokesperson for the team told RACER that “Danica Patrick is not a driver for RCR nor does it have plans to field a car with her as the driver for next month’s Daytona 500.”

Where does that leave Patrick? Three weeks before cars are on track to practice and qualify, anything is possible – including Patrick linking up with a smaller team that’s willing to field a car.

Tommy Baldwin now works with Jay Robinson at Premium Motorsports, however, Baldwin fielded the No. 7 Chevrolet in select races last season, including at the restrictor-plate tracks. Baldwin declined to comment, but it should also be noted that Premium Motorsports is still in the process of finalizing its own plans for the 2018 season.

Patrick said this week she was very close with her plans for Daytona and an announcement could be coming soon. Which means that she can then turn her attention to securing a ride for Indy.

As with NASCAR, the majority of IndyCar’s front-running programs have confirmed their lack of openings. Andretti Autosport, Chip Ganassi Racing, Rahal Letterman Lanigan Racing, Schmidt Peterson Motorsports, and Team Penske have all ruled themselves out and wished her the best of luck. And while the topic of possibly running four cars has been raised at Dale Coyne Racing, the team is tipped to stay with three, which would close another door for Patrick.

Again, it leaves her best chances in a Chevy-powered entry. Multiple sources have told RACER that Patrick’s management team has been in contact with Indy 500 polesitters Ed Carpenter Racing; Indy specialists Dreyer & Reinbold Racing have confirmed talks with her and the impressive newcomers at Harding Racing also are also considered a viable option for the Wisconsin-born driver. 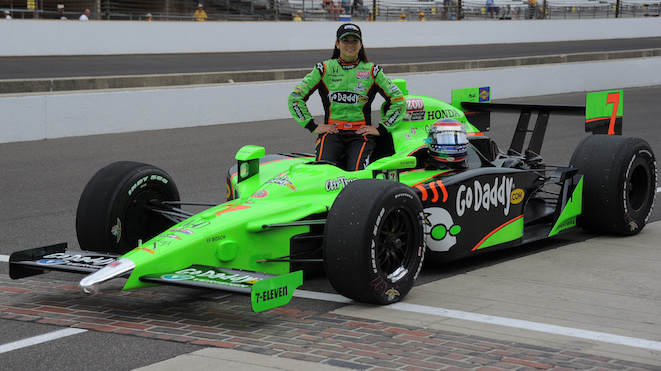 As DRR owner Dennis Reinbold told RACER on Thursday, “I have spoken with her people, but I don’t know where we’re at with them,” which follows a similar pattern to what’s said to be taking place with ECR.

Seeing Patrick in a third ECR Chevy as teammate to Spencer Pigot and Ed Carpenter, or in a second DRR Chevy alongside Sage Karam, seems all but inevitable at this stage.

Harding’s Chevy IndyCar outfit is another destination that could accommodate Patrick with ease. Full-season driver Gabby Chaves finished ninth on the team’s IndyCar debut at the 2017 Indy 500, and with the recent addition of former IndyCar leader Brian Barnhart to the program as its president, she has another competitive solution to consider.

“We’ve had a lot of people reach out, and I would certainly have interest in having Danica in one of our cars, and have a great relationship with her,” Barnhart told RACER. “She’s done a lot for the sport and helped the sport on a lot of levels. I’d welcome talking with her, but to be honest, we haven’t spoken at this time. It’s clearly in our plans, with the right deal, to be a two-car effort at Indianapolis.”