DC Solar will expand its partnership with Chip Ganassi Racing as it sponsors cars in both the Xfinity Series and the Monster Energy NASCAR Cup Series this season.

CGR announced Tuesday that DC Solar would be a primary sponsor of Kyle Larson’s No. 42 Camaro in a double-digit number of races. The company will also serve in the same capacity for a handful of races with the No. 1 of Jamie McMurray. Both drivers will also sport the DC Solar colors in a handful of Xfinity Series races driving the No. 42.

“We have enjoyed our partnership with DC Solar and are very excited to welcome Jeff [Carpoff, co-found and CEO of DC Solar] and Paulette to the Monster Energy NASCAR Cup Series,” said owner Chip Ganassi. “It has been a fun three years growing our partnership, and we look forward to an exciting and successful first year with them on the cars with Kyle and Jamie.”

DC Solar spent the past two seasons as the primary sponsor on Brennan Poole’s car in the Xfinity Series. Poole is searching for a ride for this year.

Larson will drive the DC Solar car for the first time in the Advance Auto Parts Clash at Daytona on Feb. 11. Larson and DC Solar are no strangers. In 2016, Larson put the company’s colors in Victory Lane when he won the Camping World Truck Series race at Eldora Speedway (below). 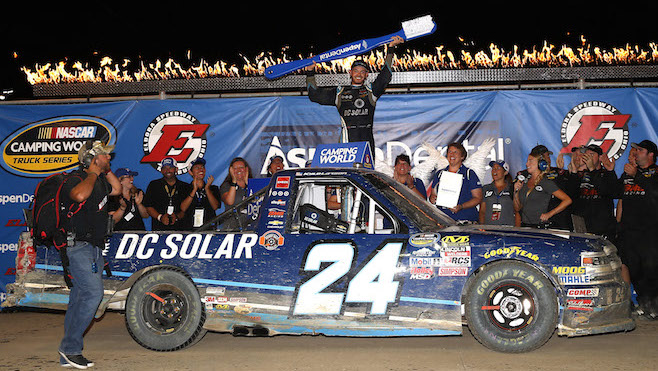 “I’m really looking forward to representing DC Solar this season in the Cup Series,” Larson said. “You can tell Jeff and Paulette are passionate about being here and about racing, so I’m excited to be a part of their first season in NASCAR’s premier series. I’ve won with them once in the Truck Series, so I’m hoping to repeat that a few times this year in Cup.”

In addition to his 16th season in the Cup Series, McMurray’s select races in the No. 42 Camaro in the Xfinity Series will mark the first time he has competed in the series since 2013. He’s an eight-time Xfinity Series winner.

“I’m looking forward to racing with DC Solar in Cup this year and a few times with them in the Xfinity Series,” said McMurray. “Our team has really done a nice job in that series having won with several different drivers the last couple of seasons. I’m also excited to drive a few times in the Cup Series with DC Solar on-board and be a part of their first full season in that series. Their enthusiasm for our team and sport is evident, and I’m glad that I get to be a part of this growth with them.”

Additionally, DC Solar will serve as an associate sponsor in the IndyCar Series for Ganassi drivers Scott Dixon and Ed Jones.