A new partnership that fell into place over the summer months when Ryan Blaney was called in-house by Team Penske for the ’18 season, it was a big win/win for all as Menard, who was looking to leave longtime employer Richard Childress Racing, was hunting for a ride while the Wood Brothers were looking for funding. Each had what the other needed, and a deal was struck. The oldest active race team in NASCAR history, Wood Brothers Racing has a wealth of experience with drivers both young and old and was poised to make the transition on the fly.

Come Daytona, the Menard/Wood Brothers combination will make for interesting storylines as Menard, an 11-year veteran at the Cup level, is looking for better things than last year’s 23rd in the points. And the No. 21 team was in competitive form in 2017, with Blaney claiming the team’s 99th win and very nearly making the Championship 4 at Homestead-Miami.

As Wood Brothers Racing looks to sustain that momentum in 2018. RACER spoke to the Wisconsin-born driver chasing win number 100 for the most storied team in all of NASCAR.

Q: You came to the Wood Brothers Racing team after seven years with Richard Childress. How has the transition been going so far?

PAUL MENARD: I wouldn’t say it has been dramatically different – it’s still a race team. The way they go about things is a little bit different, for sure. Eddie and Len and Leonard and Kim Hall and everybody at Wood Brothers Racing have been awesome, and so welcoming to me and my family.

And the relationship the team has with Penske on the technical side has been great, and we’re trying to figure out how everything flows together there. We’re just kind of learning as we go, but so far, so good. We’ve got a seat built for me and we’re ahead of the game on all that and we’re going to do a test at the end of January out in Las Vegas, so things are coming together. 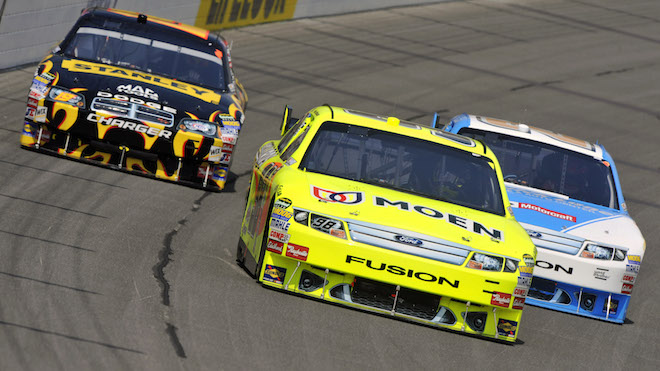 PM: Yeah, we had a great meeting at Homestead with a lot of the high-ups at Ford to just kind of get to know each other. Great people. Good-hearted racers; they are definitely a racing-bred group and a lot of fun to work with, and I’m going to continue to build that relationship. The last time I was in a Ford was seven or eight years ago, so a lot has changed since then, obviously. I’m excited to feel the Roush-Yates horsepower.

Q: You ended up 23rd overall in the 2017 Monster Energy NASCAR Cup Series. Perhaps not what you wanted, but there were bright moments, especially in the two Daytona races where you finished in the top five.

PM: Yeah, the plate tracks were definitely our highlights of the year for the No.27 car. Obviously, it was great for the No.3 [Austin Dillon] and the No.31 [Ryan Newman] to get wins at Charlotte and Phoenix, and I was real happy for Ryan and Austin and Richard. We couldn’t quite hit it. We had a couple of opportunities and speedways to win races, but outside of that, it was a little bit of a disappointing year. But that was last year, and we’re we are working on 2018 right now.

PM: I have no idea. Honestly. I really don’t know! (Laughs)

Q: You’ve been at it a long time now. Are you still as motivated and enjoying the racing as much as in the past?

PM: Yeah. I mean, it is different now with the family. The travel can be tough. Before, you would look forward to every weekend and every Thursday and going off an adventure. Now with kids, it just changes the dynamic a little bit. You have to leave your kids and your wife at home, so that’s different.

The competitor in me – and I’ve always competed since I was a little kid – makes me still want to go out there and do the best job I can. I love the team aspect of our sport, where we can try to figure out things as a unit with the engineers and crew chiefs and mechanics. Everyone in the unit tries to figure out how to get better. That’s probably the most rewarding part for me. If you all come together and you make a change on the race car and it goes faster, that’s what we do it for.

Q: Change can be a good thing. You had a good run at RCR, but is it good to go into the 2018 season with a clean sheet of paper? 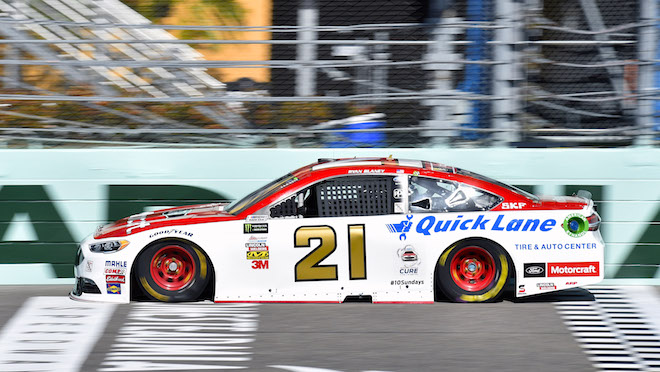 PM: I think making the Chase is the number one goal, and winning a race is a hell of a good way to make the Chase. We’re basically a new team coming together here with the 21 group. A lot of the 21 guys from the last couple years went to the 12. There are still some of the guys on the team from before, but we’re going to be learning each other a lot this first early part of the season.

But I feel like we have a really good supporting cast with our technical partner at Penske. [Crew chief] Greg Erwin comes from Penske, so he knows how they operate ,and the Wood Brothers have had fast cars the last couple years and they know what they’re doing. We’re going to learn a little bit this first part of the year, but I really feel like to make the Chase would be the number one goal and winning a race to make the Playoffs would be a good way to do it.