MSR recently announced the driver line-ups for its cars, with the No. 93 Acura NSX GT3 set to be driven by Lawson Aschenbach, Justin Marks, Mario Farnbacher and Come Ledogar, while Katherine Legge, Alvaro Parente, Trent Hindman and A.J. Allmendinger will share the No. 86 Acura NSX GT3 entry.

With coordinating colors, the No. 93 – numbered after the 1993 founding year of Honda Performance Development – will sport a striking red design with a gray and black “spray painted graffiti” look. The sister car – numbered after the birth of Acura in 1986 – will coordinate with a similar design but with gray primary coloring. 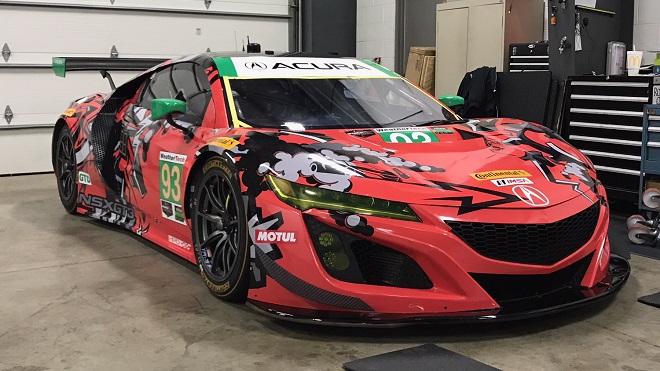 Both designs – which were originally created for MSR team driver suits by Jessica Karp – were so eye-catching to team owner Mike Shank, that they were soon transformed for the two car Acura NSX GT3 line-up.

“We had some awesome designs last year, but this season we are not carrying the Acura branding so that gave us a bit of a clean slate to come up with something all-new, and when we saw the renderings for the driver suits it was something that we wanted to go even further with and put on the cars,” said Shank. “It came out even better than we were hoping it would! We are all packed and ready to get to work down in Daytona and hopefully everyone is as excited about these cars as we are.”

The Michael Shank Racing Acuras will debut at the annual ‘Roar Before the 24’ test at Daytona International Speedway on Jan. 5.