Kurt Busch will continue with Stewart-Haas Racing next season, but it will be with a new crew chief. Newcomer Aric Almirola is also going to be working with a new face on the No. 10 team.

SHR announced Friday morning that Billy Scott will oversee the No. 41 Haas Automation/Monster Energy Ford team. Scott moves over from the No. 10 team, where he had worked with Danica Patrick for the last two years.

Scott’s taking of the reins allows Tony Gibson to come off the road, as he expressed throughout this past season he had hoped to do. Busch and Gibson had been paired together since late 2014, and won four races together.

Gibson will remain at SHR in an unnamed role.

Working with Almirola in 2018 will be Johnny Klausmeier. A racer engineer at SHR since 2009, Klausmeier served as Busch’s interim crew chief when he won at Pocono in 2016.

“We have some of the finest talent in the industry and we’re confident in the leadership of each of our teams as we pursue wins and a championship in 2018,” said team co-owner Tony Stewart. “Obviously, we’re very happy to have Kurt Busch back with SHR and I’m proud to have Aric Almirola as part of our race team. He’s someone I’ve always been impressed with since we were teammates at Joe Gibbs Racing, and John Klausmeier is more than ready to be his crew chief.”

The pairing of Kevin Harvick and Rodney Childers will stay the same. Harvick and Childers have worked together since 2014. In addition to winning the championship in their first season together, the duo has 14 race wins together in the last four years.

Clint Bowyer, who joined SHR in 2017, will continue to work with Mike Bugarewicz.

“The partnership between Kevin Harvick and Rodney Childers is the best in the garage and after a bunch of strong runs and second-place finishes, I think Clint Bowyer and Mike Bugarewicz are ready for a breakout year,” Stewart continued. “We’re in a really good place with each of our race teams.” 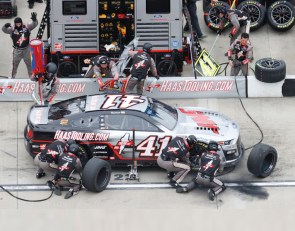